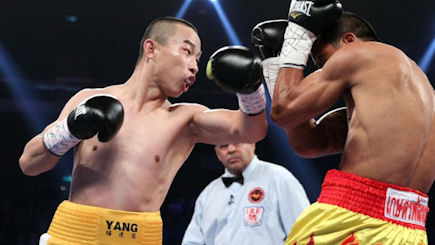 Zou Shiming’s dreams of adding a world title to his two Olympic gold medals might have been squashed by his “shock” loss to Thailand’s Amnat Ruenroeng in March, but it could prove a blessing in disguise if boxing is to win over the lucrative Chinese market.

With his lack of punching power, Zou was never realistically going to be the man to spark a boxing boom in his homeland the way Yao Ming did for basketball or Li Na for tennis. Yet, ironically, the real contender might have been staring us in the face all along. “IK” Yang Lian Hui will headline the “Victory at the Venetian” fight night at the Venetian Macau on 18 July with the IBF Junior Welterweight belt his prize should he prevail. And he is a very good chance of doing just that – a feat that would see him become just the second Chinese boxing world champion and the first in a genuinely accepted weight class.

Currently the number two world-rated Junior Welterweight contender, Yang will take on number one contender Cesar Cuenca of Argentina after the belt was made vacant in April. Cuenca is undefeated in 13 years of boxing and boasts an impressive 47-0 career record, but that record is deceptive – he has never fought outside Argentina, never before earned a world title fight and most notably has produced only one KO and one TKO in those 47 fights. Although his experience and the fact that he is a southpaw suggest Cuenca will be tricky, he clearly lacks power.

Not so Yang, whose 18 professional bouts have produced 18 wins with 13 by knockout. This shapes as a perfect fight for Yang who can attack and try to put his power to good use without fear of opening himself up to a knockout in the process. He is, quite literally, just one good punch away from a world title. The great irony is just how determined promotion company Top Rank was to paint Zou as their golden ticket to China when they also had Yang on their books the whole time. The natural reaction when Zou’s title dreams hit the canvas was to consider boxing’s Chinese ambitions vanquished too, yet the opposite is true.

And if winning a world title is the first step in getting China to finally take notice, it is an entertainer like Yang most likely to get them hooked.