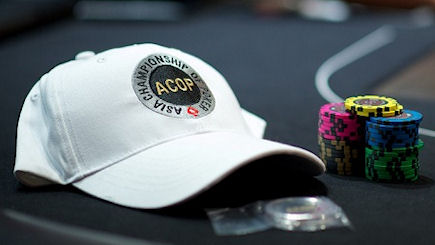 PokerStars LIVE Macau has released the 2014 schedule for its flagship event – the Asia Championships of Poker (ACOP) – which will run from 24 October to 9 November.

The 17-day schedule features 21 events including 14 ACOP Title Events culminating in the HK$100,000 Main Event which comes with a HK$15 million guaranteed prize pool. Among those already confirmed to take part are Bertrand Grospellier, Randy Lew and Raymond Wu. Last year’s ACOP attracted a total of 2,235 players and awarded more than HK$49 million in prize money with this year’s series expected to attract record fields. “There’s a new level of excitement for poker in Macau this year and we’re anticipating a big turnout for the ACOP,” said APPT president Danny McDonagh. “We’ll have further announcements as we approach the event date but the fact we’ve received player confirmations this far in advance just illustrates the excitement for the ACOP in Year 3.”

The full schedule for ACOP 2014 can be found at http://www.pokerstarsmacau.com/tournaments/acop/