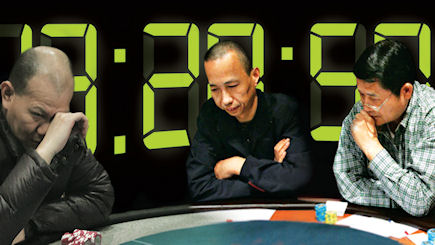 Is it right to call the clock on an opponent? And if so, when is it okay to do so? As far as poker etiquette goes, this particular subject is one of the most controversial and opinions are divided as to when one player can justifiably call the clock on the other. World Gaming takes a look at the ins and outs of “calling time”.

Without doubt one of the most divisive issues at a poker table revolves around what is known as “calling the clock” or “calling time.”

Calling the clock refers to the act of putting a time limit on an opponent when they are in the process of making an important decision. If any of the other players at the table believe that the person in question is taking too long to make a decision, they can call the clock which will see the tournament staff give the person a certain amount of time to make their decision – usually one minute, but it can vary – or else their hand will be deemed dead.

The precise rules vary from venue to venue. For example, in some casinos any player at the table can call time while in others only players not still involved in the hand may do so, primarily in order to avoid gamesmanship. Likewise, some casinos only allow players at the same table to call time, while in very specific circumstances, such as on the bubble of a tournament or during hand for hand play, others allow players at another table to make the call. In rare circumstances tournament staff can call time on a player and players have even been known to call time on themselves!

Some venues allow their staff to be discretionary in how they apply time in cash games. If it is a low limit game with only $50 in the pot, the player in question might only be given a further 10 seconds to act while a high stakes game with a few thousand in the pot would likely be given another minute or two. But no matter what the stakes, the issue of calling the clock on an opponent has always been shrouded in controversy.

So should you or shouldn’t you? Opinions on this topic are widely divided but for the most part players generally agree it is poor etiquette to call the clock on an opponent except in extreme circumstances. With very large sums of money on the line, it is understandable that a player is going to run through all the possible outcomes in their mind before making a decision that could make or break their dreams. The flip side of this is that some players aren’t ashamed to abuse the system, so although it is considered poor form to call the clock on someone the first time they go deep into the tank, you shouldn’t hesitate to do so if they start “tanking” on a regular basis.

In fact, there was one truly memorable hand played on the final table of the Asia Pacific Poker Tour Queenstown Main Event last August which saw the clock called on four separate occasions, including three times on the one street!

The two players in question, New Zealanders Chiu Lee and Jon Pierre Narby, had been battling one another throughout the day and had already built up a reputation for taking their time, but when they played out a hand that lasted a full 17 minutes it proved too much for the rest of the table to take.

Time was first called on Lee on the flop after he had tanked for several minutes and when play proceeded to the river the action really slowed down. On a board that read 8-10-9-7-A, Narby took nearly 10 minutes before another opponent called the clock. Narby eventually checked and now it was Chiu’s turn to spend minutes making a decision. The clock was called again. He eventually announced he was all-in and of course now Narby took his time again. The clock was called for the fourth time and Narby folded.

In this case the two players in question were understandably given a warning by tournament staff for time wasting and although they might have wanted to wage a war of attrition against one another they were well and truly out of line putting the rest of the table through their antics. This was a blatant example of players deliberately wasting time and their frustrated opponents had every right to call the clock on them. In fact, we’re surprised they waited so long to do so!

Thankfully, situations like this one don’t arise very often and most players tend to be fairly reasonable when it comes to deciding how long is too long. Just as there is no reason you should need five minutes to make a decision when playing the low limit tables at your favorite poker room, you will also see players try their hardest not to call the clock at, for example, the final table of the World Series of Poker when one decision could literally be worth US$1 million. Daniel Negreanu: calling time should be a last resort for serial offenders

Yet no matter when or where, it is unlikely everyone will always agree. Some high profile players, such as Daniel Negreanu, believe the clock should only ever be called if a player is a repeat offender. Others, such as WSOP bracelet winner Lee Watkinson, are frustrated by the amount of time some players take to make the most basic of decisions and believe the clock should be called far more often and on far more people than it currently is. Both viewpoints have merit and perhaps a happy balance between the two should be found with common sense the prevailing factor in whether to call or not to call the clock.

Of course, the upside of calling the clock is that it can lead to some highly amusing situations, such as the one World Gaming CEO Andrew W Scott was involved in some years ago. Down to the final three players in a shootout tournament at the WSOP, Scott announced he was all-in and his opponent in the hand went deep into the tank. Recognizing that this was a big decision very deep in the tournament, neither Scott nor the player not involved in the hand wanted to call time but after eight long minutes the other player finally spoke up.

“Sorry but I think I have to call time,” he said, to which the player supposedly contemplating his decision said, “Oh, is the action on me?” … and quickly mucked his hand!