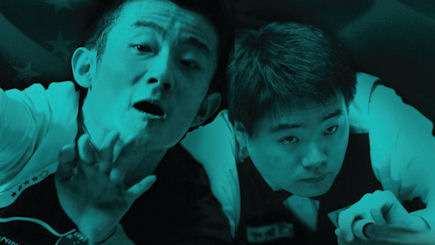 There was a time not so long ago when China was merely a bit-part player on the world sporting stage, but those days are long gone. No longer content with Olympic dominance alone, China celebrated the New Year with two sporting superstars climbing to the top of the world rankings in their respective sports – snooker’s Ding Junhui and badminton’s Chen Long. China’s powers that be have made no secret of their desire to dominate on the global sporting stage and those ambitions have taken a giant leap forward over the past few months with snooker star Ding Junhui and badminton youngster Chen Long both climbing to the top of the world rankings.

Ding capped a phenomenal 2014 in which he equalled the all-time record of five ranking title wins in a single season by becoming just the 11th player since rankings started in 1976 and the first from Asia to hold the number one spot. Incredibly, Chen matched his feat less than two weeks later – taking advantage of Lee Chong Wei’s doping suspension to end the Malaysian star’s six-year reign at number one.

Other than a short period in 2012 when Chinese great Lin Dan held the top ranking, Lee had officially been the world’s best player since August 2008, but it would be unfair to suggest that his suspension was the sole reason for Chen’s rise. The 25-year-old, from Jingzhou, has been on the verge of bigger things since racing to the number three ranking in 2010 at the tender age of 21. Having won his first Super Series title earlier that year, he has added another 12 Super Series trophies to the cabinet over the past four years but most notable is the fact that seven of his 13 titles have come via a win over Lee in the final.

Although the pair boast an all-time 9-9 record against one another, Chen holds a 7-2 record in Super Series finals with Lee’s only two wins coming, ironically, in 2014 at the India Open and All England Open. Perhaps the most telling result of all, however, came in Lee’s final major tournament before suspension when Chen prevailed 21-19, 21-19 in the final of the prestigious World Championships in Copenhagen. Despite his dominance of the rankings over a long period, the World Championships crown has eluded Lee while Chen has quickly started ticking these major career goals off his list.

Following on from his World Championships success, Chen capped a wonderful year by adding the Super Series Masters Finals title in Dubai to his growing list of achievements – the second time he had won the event following victory in 2012.

Now officially the world’s number one player, the semi-retirement of Lin Dan and Lee’s suspension could open the door for a record haul in 2015 followed by a tilt at the big one – gold at the 2016 Olympic Games in Rio de Janeiro.

Of course, Chen comes from good pedigree on the badminton court where seven different men and 11 different women have won World Championships gold since its inception in 1977 but snooker has, historically, been a different story.

Long dominated by England, the World Snooker Championship celebrated its 80th anniversary in 2014 with Mark Selby’s victory marking the 77th time a British player had lifted the trophy. Only Canada’s Cliff Thorburn in 1980 and Australian duo Horace Lindrum in 1952 and Neil Robertson in 2010 have managed to briefly snap Britain’s dominance. Among a queue of players from Great Britain, China’s snooker great Ding Junhui is challenging the global power base

But Ding’s rise to the top of the world rankings in December is without doubt a sign that times are starting to change. If England was snooker’s past, China is very much its future. Some have gone so far as to call China the sport’s saviour given the much-needed boost in viewership, and therefore money, it has provided since Ding first announced himself as a rising star by winning the China Open in 2005.

At a grassroots level, China’s growing infatuation with snooker has seen an estimated 60 million Chinese take up the sport at an amateur level with a million of those believed to play every single day. This has coincided with an explosion in the number of snooker halls to be found around the country with almost 1,000 located in Beijing alone.

The Chinese government, who in recent years have shown a willingness to provide seemingly limitless financial support to elite juniors to ensure their success on the world stage, has responded to this latest craze by establishing the country’s first snooker coaching academy in Beijing in early 2013. Their efforts are already starting to show at the elite level, with 16 Chinese tour professionals plying their wares around the world and a couple of child prodigies making the big guns more than a little nervous. They include 14-year-old Yan Bingtao, who in November became the youngest ever player to win the World Amateur Snooker Championship, and Yuan Sijun who was handed a wildcard to the 2013 Shanghai Masters at just 13 years of age.

It’s no coincidence that of the 11 rankings events held annually, five of them are now in China. That number is only going to grow.

Given that so much of this shift in snooker’s power base can be attributed directly to Ding, it’s fitting that he found himself at the top of the world rankings – even if the closeness of competition at the top saw Australia’s Robertson quickly reclaim top spot soon after. Still just 27, Ding’s 11 career rankings event wins already has him sixth on the all-time list and although he has some way to go to match Stephen Hendry’s record of 36 titles, it’s quite possible that in time, history will remember Ding Junhui as snooker’s single most significant figure.