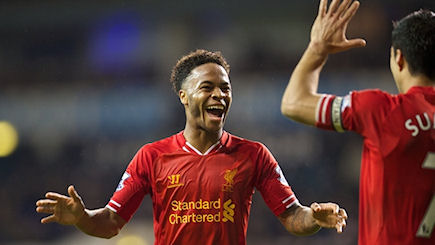 It was a massive win for Liverpool over fellow title contenders Manchester City on Sunday in a dramatic match at Anfield. The timing couldn’t be more fitting, as it was 25th anniversary of the Hillsborough disaster. The FA delayed every league games through England by seven minutes to pay tribute to the FA Cup match in Hillsborough in 1989, which was stopped six minutes after kick-off as the tragedy which killed 96 people unfolded. Raheem Sterling scored a priceless goal for the Reds

Liverpool took an early 2-0 lead through Raheem Sterling and Martin Škrtel with the first half all about the Reds. They kept possession well and attacked fearlessly, and with more efficiency from strikers Daniel Sturridge and Luis Suárez could have scored more. But the second half was a different story. Liverpool sat too deep, inviting City back into the match. David Silva scored one goal before forcing Glen Johnson to concede an own goal to level the scores. At that point even veteran Stevie Gerrard feared for the worst., but Vincent Kompany, one of the best center-backs in the game, made a huge mistake when he tried to clear the ball only to miscue straight to Phillipe Coutinho who drove the ball past a hapless Joe Hart. Liverpool is now in pole position in the title race, but they shouldn’t get too carried away. Chelsea beat Swansea 1-0 thanks to a Demba Ba goal to ensure the season will go down to the wire, but Liverpool looks good to climb back to the top of the perch after 24 years of waiting.

Everton leapfrogged Arsenal into the fourth place after beating relegation bound Sunderland. Although the Gunners knocked out Wigan to secure a seat in the FA Cup Final, they were booed by their own fans at times during the match. Their morale couldn’t be lower as they are now facing the real risk of losing their Champions League spot for the first time in more than a decade.