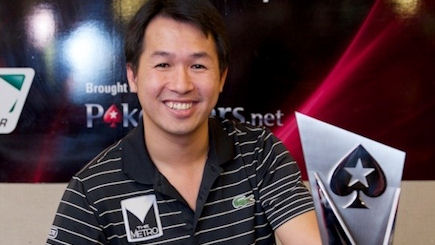 The 31-year-old outlasted a solid field of 260 players at The Metro Card Club to take home the top prize of almost PHP 3.5 million (US$80,000), but it took a huge effort to haul in Australian pro Michael Guzzardi who was the only player to boast a stack of 1 million in chips heading into the final day’s play. In-fact Guzzardi held around 30 percent of chips in play with 11 remaining and entered heads up play a huge favorite.

He looked odds on to take down the title early in heads-up play when he got it in with K-K against Duong’s 7-7, but the Vietnamese caught a miracle 7 on the turn to double up and never looked back from there. “It’s the biggest reward of my life,” Duong said afterwards.

While the total number of players was undoubtedly impacted heavily by the fact that many of the region’s regulars are currently in Las Vegas for the World Series of Poker Main Event – which kicked off last weekend – it was great to see this prestigious event back after a three-year hiatus. APPT Manila was the first APPT event ever held back in August 2007 and remains close to the hearts of many tournament players across the Asia-Pacific region.