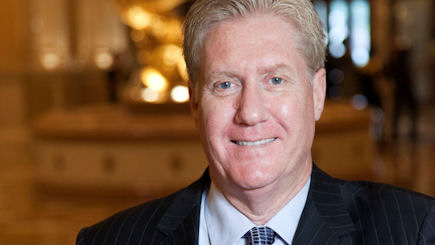 Like most in the Macau gaming landscape, we were caught by surprise last month when Sands China President and CEO Ed Tracy announced he would be retiring effective from 6 March. Gaming executives may come and go, but few can claim to have made such a telling impact as Tracy has since he first landed in Macau in mid-2010. Not only did he steady the ship following the tumult that surrounded predecessor Steve Jacobs’ bitter departure, he also recognized the need for a greater focus on non-gaming across Sands China’s Macau properties.

Tracy was the brains behind the Venetian’s hugely popular boxing and MMA fight nights which have become regular fixtures at Cotai Arena throughout the year and provided a valuable vehicle through which to broadcast the Venetian name into mainland China.

He also oversaw the company’s innovative partnership with DreamWorks Animation, with characters from movies like Shrek and Kung Fu Panda interacting with guests in what was a concerted push to attract families.

And at a time when it would have been easy to get carried away with Macau’s seemingly endless boom, Tracy understood that mass and premium mass were the way of the future.

We wish Ed all the best with his future endeavors and needless to say he will be sorely missed.