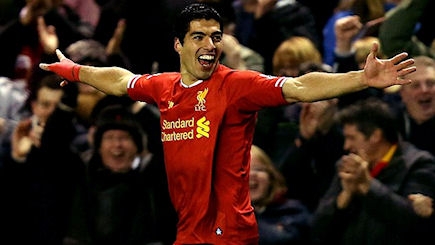 With just six weeks of the 2013/14 season remaining, the English Premier League looks set for the closest finish in its history. Not once since the EPL was formed in 1992 have four sides been separated by so little at this stage of the season with Liverpool, Chelsea, Manchester City and Arsenal still in the hunt, and you’d need to go back a full 42 years to find a similar finish in the top flight of English football when Derby County finished one point clear of Leeds, Liverpool and Manchester City.

So how is it all going to play out? Let’s go team by team.

It’s been a long time between drinks for the Reds. The most dominant side in the history of English football has never won an EPL title despite a number of close calls and until this season the fans were starting to wonder whether they would ever be able to again challenge the big spenders such as Chelsea and City. But new manager Brendan Rodgers has worked wonders since taking over 18 months ago – turning this once hot and cold side into the most lethal attacking unit in the country. Liverpool led the league at Christmas before narrow away losses to title rivals City and Chelsea appeared to push them out of the race. But with eight wins in a row and some recent slip-ups from the other contenders they are suddenly back on top of the table with their fate in their own hands. It’s the nature of Liverpool’s wins that have been most impressive. Last month they blasted Arsenal away 5-1 in a stunning performance at Anfield, performed a similar task on Merseyside rivals Everton to win 4-0, won 3-0 away to Manchester United and last night moved back to the top with a 4-0 win over Tottenham. The Reds now sit safe in the knowledge that the title is in their hands – win all six games and they can’t be topped. Four of those games are at Anfield but, ironically, two of the four are against City and Chelsea. It’s fair to day they will be the two biggest games for the club in more than 20 years. The return of the “Special One” in manager Jose Mourinho this season has sparked the Chelsea resurgence billionaire owner Roman Abramovich was looking for. Despite Mourinho’s best efforts to play down his side’s title chances, they’ve been there or thereabouts all year and until a shock 1-0 loss at Crystal Palace at the weekend had made top spot on the ladder their own for the best part of two months. Currently two points behind the Reds, they are a class outfit as highlighted by a stunning 6-0 thrashing of Arsenal last week, but have three main concerns heading into the home stretch. One, their away form has been shocking of late with consecutive losses to Palace and Aston Villa. Two, they rely a bit too heavily on their mid-field for goals with none of their strikers having shown any great consistency this season. And perhaps most importantly, their destiny is no longer in their hands. The Blues need both Liverpool and City to slip up at least once each in the run home, so Chelsea will have to beat the Reds at Anfield and ideally hope Liverpool and City play out a draw in their upcoming clash to sneak back past.

The side still favored by many to lift the trophy this year, Manchester City has enjoyed a similar revival to Chelsea this season under their own new manager Manuel Pellegrini after finishing well behind cross-town rivals Manchester United last year. Led by the lethal strike force of Edin Džeko, Sergio Agüero and Àlvaro Negredo, they built up a reputation early in the year for slaughtering opponents on home soil and by January had become the fastest ever side to score 100 goals in an English season. Since then the goals have dried up a bit and like Chelsea their away form hasn’t been overly convincing either – a 1-1 draw at Arsenal at the weekend means they are now four points behind Liverpool albeit with two games in hand. Like the Reds, City also have their destiny in their own hands and if they can win at Anfield in two weeks’ time they will have taken a huge step towards glory. They also know what it’s like to win on the final day. Two years ago they needed to beat Queen’s Park Rangers to win the League ahead of United. As the game reached the end of the 90 minutes and headed into five minutes of stoppage time they trailed 2-1 and were no hope but, incredibly, a Džeko goal 75 seconds into added time leveled the scores before Agüero scored the winner 90 seconds later. Written off as a contender at the start of the season after failing to land a major signing until the very last minute, Arsenal surprised everyone as they rocketed out of the blocks with eight wins from their first 11 games to build a handy lead at the top of the table. Unfortunately, injuries and a lack of depth eventually caught up with them and they now find themselves battling to guarantee their Champions league spot by finishing in the top four as much as they are fighting to catch the three sides above them. The biggest worry for Arsene Wenger has been just how poorly they have performed against the other top sides away from home, having conceded six at both City and Chelsea and five at Liverpool. They now find themselves seven points behind the Reds and just four above Everton. They will need a miracle if they are to win the title although they regained some confidence with a 1-1 draw with City over the weekend and if they can manage a win over Everton next Saturday they have a great run home with just one game to come against a side in the top half of the draw.