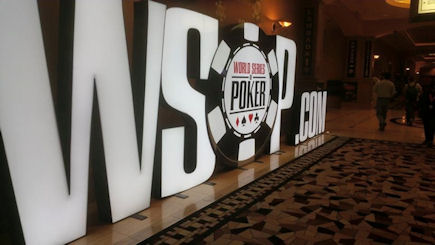 Warning: sections of this article contain poker terminology. If it feels like reading another language to you, please ask a poker friend for a translation!

Gone too soon. That’s the story of my 2015 World Series of Poker after a week’s worth of “run bad” continued into Day 1b of the Main Event on Monday. Perhaps it was an omen that I ran into a good friend of mine on the way into the Amazon room in the first hour and he had already busted! In the end, very little went right for me in the Main Event, much like the many satellites I played earlier in the week.

It began when I flopped a set of 3s on an AJ3 board but was eventually forced to fold when it became apparent that an opponent held pocket rockets to have me beat! I was very pleased with my fold in that spot and was confident of taking advantage to build a big stack but good fortune never arrived. Three times in an hour I whiffed the flop with AK, on another occasion I lost a small race with K9 against 88 … and then this happened.

Sitting to my right was a nice young kid from Guangzhou who had built himself a monster stack through a combination of lagtard madness and going on a crazy heater. Shortly before the dinner break he already had 130,000 – the sort of stack many players would be happy with on Day 3!

He had been playing 90 percent of his hands for well over an hour although he seemed to be struggling with the rules and chips a bit so was most likely an online player. After seeing him constantly raising and re-raising people, he opened again in the hijack and I looked down at JTo in the cutoff. A good chance to 3-bet, except that as soon as I did he came back over the top with a 4-bet! “Here we go again,” I thought, “Yet another pot he’s going to take down with relentless raising.”

My image at this point was a good one, having shown some big folds, and with a perfect shoving stack I decided to 5-bet all-in knowing his range was basically any two cards. Typically, the moment I shoved he snap-called me, turning over KK for one of the few hands able to call in that spot. The board came AKx and when no Q arrived to give me a miracle double my 2015 WSOP came to an abrupt end.

Oh well, if someone had to knock me out at least it was a player from China! In the meantime, it’s back to the real world for me with a few weeks back home in Macau then the Vietnam Poker Cup at Ho Tram from August 21 to 23.