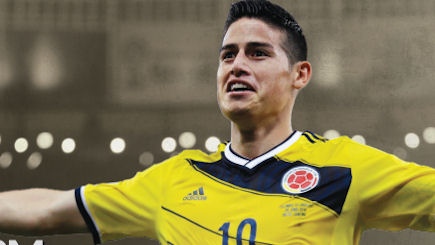 Florentino Pérez was on the verge of a significant conundrum. The Real Madrid President knew the summer signings at the Bernabéu and Camp Nou would be considered just as important as their pursuit of the league title. Last summer when bitter rivals Barcelona unveiled Neymar, Pérez pursued Tottenham star Gareth Bale relentlessly and eventually acquired the Welsh superstar thanks to a record transfer fee. This summer a new problem emerged when Barca announced the signing of the controversial but brilliant Liverpool striker Luis Suárez. The Catalan’s new £75 million signing threatened to be a PR disaster for Pérez … until a new superstar emerged in Colombian James Rodríguez – one of an elite group of rising stars whose careers are set to soar following their heroics at the 2014 World Cup. James Rodríguez, a €45 million acquisition of super-rich club Monaco just last summer, isn’t exactly an overnight success. His time in Portugal, then France, suggested he was a star in the making. But if there were any doubts, they were spectacularly put to bed in Brazil. A natural number 10 who can also perform out wide or as a number 9 thanks to his agility and speed, Rodríguez is blessed with great vision, wonderful technique and breath-taking goal scoring ability. The 23-year old exploded at the World Cup with six goals in five games to win the Golden Boot award as tournament top-scorer – claiming three man of the match awards along the way.

It was those performances, including his stunning long-range strike against Uruguay in the Round of 16 (named goal of the World Cup), that had Europe’s giants knocking. But as a lifetime fan Rodríguez was always going to end up at Real Madrid. Earlier this year he travelled to watch Real’s Champions League final victory and happily posted a photo with Cristiano Ronaldo on social media after the game. He also happens to be represented by Jorge Mendes, the powerful agent of many top players including Ronaldo himself.

So the deal was done within days of the World Cup wrapping up with Rodríguez’s huge €80m transfer fee placing him in the exclusive realm of new teammates Ronaldo and Gareth Bale as well as Barcelona duo Neymar and Suárez … and he’s still only 23 years old! It’s highly doubtful the young Colombian would have attracted such a fee had it not been for the World Cup given his modest nine goals in 34 appearances for Monaco last season, but that Golden Boot award certainly looks good on the resumé.

Another Colombian, goalkeeper David Ospina, also prospered thanks to his perfomances in Brazil. Ospina has a personal connection to Colombia’s newest hero with Rodríguez having married his younger sister, and he too is celebrating a career boost after being snapped up by English Premier League giants Arsenal. Having spent the past six years with a pretty ordinary Nice side, Ospina will now be part of a Gunners outfit which has spent big over the summer and is likely to challenge for trophies in the coming years. Arsenal manager Arsène Wenger has already confirmed his new keeper will take over the number one spot from Wojciech Szczesny if he impresses early.

Even with the record number of goals scored in Brazil, the World Cup proved to be a highly successful one for goalkeepers, such as Mexico’s Guillermo Ochoa who has been plying his trade for French lower league team Ajaccio. Ochoa produced an unbelievable performance to keep hosts Brazil at bay in their group stage goalless draw and is suddenly being chased by a number of top European clubs – although his final destination was yet to be confirmed when we went to print.

Keylor Navas is an even better example. The Levante goalkeeper was superb for minnows Costa Rica, who shocked everyone by topping their group ahead of giants Italy, Uruguay and England, conceding just one goal in the process. In the Round of 16 clash with Greece, Navas was the one man to stand firm against a late Greek onslaught and produced two brilliant saves in the penalty shoot-out to help Costa Rica progress to the quarter-finals. They eventually fell to the Netherlands but only in another shoot-out after Navas again kept a clean sheet in regulation and extra time. Real Madrid has been quick to seek him out in their quest for a long-term replacement for Iker Casillas.

The World Cup may not be the ideal place for scouts to discover future stars, but for those who want ready-made products it is the perfect stage. And for the players, many of whom don’t play for nations capable of going all the way, the tournament is their opportunity to move onto bigger and better things. In some cases it can even prompt an unexpected career resurgence.

Take the example of Australian striker Tim Cahill. Two years ago he farewelled the EPL after eight successful seasons with Everton and moved to American Major League Soccer club New York Red Bulls for the final phase of his career. He went to Brazil as part of a Socceroos squad tipped by many to exit without scoring a goal, but after scoring two goals himself, including a stunning volley against the Netherlands, he suddenly found a raft of EPL clubs trying to lure him back to England.

Another to send a gentle reminder of his talents was German midfielder Toni Kroos, who only months earlier had opted against renewing his contract at Bayern Munich. The midfielder had a wonderful tournament, playing his part in the World Cup winning team while individually ranking at the top in the Castrol Index which is the definitive system for rating player performances in the tournament. Kroos, rated at 9.79 points, was followed by Arjen Robben and Stefan De Vrij of the Netherlands.

Real Madrid has now successfully brought him in as a replacement for Xabi Alonso at a cost of £20 million. In an age where player prices are so inflated that even relatively no-name World Cup players can command around £10 million, Real’s deal for Kroos seems too shrewd to believe. But the reason is simple – he had only one year left on his contract at Bayern and knew his time was limited, so rather than asking for an early contract he waited patiently until after the World Cup and found himself a new home without the Spanish giants having to fork out an astronomical figure for his services. By comparison, Liverpool signed Suárez to a new five-year deal last season in the full knowledge he craved a move to Spain and when the Uruguayan gave them little choice but to sell following his latest suspension for biting in Brazil, the Reds were able to pocket a huge fee for his services from big spending Barcelona.

The World Cup not only creates superstars, it also serves as a great platform for ambitious young men to make a statement and court new clubs. Every four years, without fail, this tournament sparks a flurry in the transfer market thanks to spectacular performances in just one or two games. Clubs are often enticed to gamble – just ask former Liverpool manager Gérard Houllier who was taken aback by the impressive performances of El Hadji Diouf and Salif Diao during Senegal’s shock run at the 2002 World Cup and spent £15 million on the two previously unknown players. Alas, they never came close to replicating their World Cup form while at Anfield.

In Real’s case, however, the brilliance of Rodríguez in Brazil has already paid dividends for them with the club quickly selling 345,000 James Rodríguez jerseys worth around £20 million – before he had even worn one himself! Time will tell if Rodríguez can carry the prestigious number 10 shirt for Real Madrid but thanks to his memorable performances at this year’s World Cup he has already fulfilled a lifelong ambition just by signing with them.