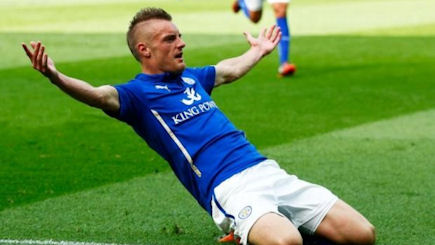 The fact that Chelsea is sitting in the bottom five is one of the truly strange situations in the recent history of Premier League, but it is not the only one. With Christmas rapidly approaching, arguably the greatest surprise of all is that one of the EPL’s minnow clubs Leicester City – a side only promoted back to the top flight last season after a 10 year absence – is sitting comfortably above Manchester United and Tottenham Hotspur in third place. Despite their manager Claudio Ranieri claiming it would be a miracle for Leicester to finish inside the top four, they have now remained there for almost a third of the season! Jamie Vardy, Leicester City’s Number 9, is the main man behind the great success of the club. A quick glance at Europe’s top goal scorers will reveal some household names like Robert Lewandowski (14 Bundesliga goals), Neymar (11 La Liga goals) and Zlatan Ibrahimovic (8 Ligue 1 goals), but Vardy’s name stands out as the most unexpected of all on top of England’s goal tally. After all, Vardy was playing non-league football as recently as three seasons ago for clubs like FC Halifax Town and Fleetwood Town!

With 12 league goals so far this season, Vardy has out-scored the likes of Sergio Agüero, Wayne Rooney and Diego Costa. Last Saturday, Vardy became only the second player in history to score in nine consecutive Premier League matches after Ruud Van Nistelrooy with a penalty against Watford. Ranieri commented that Vardy reminded him of Argentina’s legendary striker Gabriel Batitstuta, who once scored in 11 consecutive matches at Fiorentina when Ranieri was manager. This is certainly not entirely out of proportion. The 28-year-old is arguably not as complete as Wayne Rooney or Harry Kane, but he is the type of player the manager can build his side’s tactics around. Vardy doesn’t link the play like most modern strikers can do but he is the type of classic centre forward that is very rare at the moment. The Englishman is at the centre of Leicester’s game plan of counter attacking without worrying about ball possession. The striker doesn’t touch the ball too often but waits patiently around the box for the punches from behind before adding his lethal final touch. This season, around one in 10 of Vardy’s touches have been shots and he requires only 34.5 touches to create each goal – less than anyone else from the league! Without Vardy’s 12 league goals, Leicester City would be sitting in 15th place!

This reliance on a single player may cost Leicester their top four spot in the end, but for now let’s just enjoy the diversity of the English Premier League.