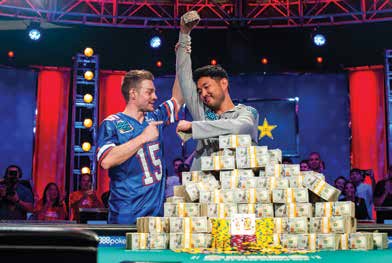 American John Cynn topped the second biggest WSOP Main Event field of all time to be crowned 2018 champion in what proved to be another fascinating series.

Thirty-three-year-old American John Cynn has been crowned the 2018 World Series of Poker Main Event champion, earning a massive US$8.8 million payday after outlasting a field of 7,873 players over 10 days to claim the most prestigious prize in world poker.

But it took a marathon effort on the final day to do so, with his heads-up battle against eventual runner-up Tony Miles lasting an astonishing 10 hours and 199 hands – the longest in WSOP history – before finally coming to an end at 5am Las Vegas time on Sunday 15 July.

Incredibly, Cynn’s victory came just two years after he narrowly missed the final table in the 2016 main event, eliminated in 11th before returning in 2018 to go all the way.

“To make 11th is insane on its own,” said Cynn after more than making amends for his narrow 2016 miss. “Then to win, that’s literally something that you dream of, but just never expect to happen. Right now I feel pretty overwhelmed – all the emotions times 10.”

The professional poker player and former logistics analyst, from Illinois, had 12 WSOP cashes to his name before this year’s main event with career live tournament earnings of US$944,786. Runner-up Miles pocketed a tidy US$5 million for his efforts – a significant increase to the US$54,333 in career earnings he came into the main event with. His previous best effort was third place in a local event in Jacksonville for US$18,000.

China’s Yueqi Zhu, who won his first WSOP bracelet a few weeks earlier, fell just short of reaching the final table this year with the 55-year-old engineer from Benxi, China eliminated in 10th place. But 2009 WSOP Main Event champion Joe Cada produced another stunning performance to secure a fifth place finish, enough for a US$2.15 million payday. It topped a spectacular 2018 WSOP for Cada, who went close to winning his third bracelet in just the second event of the series with a final table appearance, then proceeded to win event three to become the 90th player in WSOP history to claim three bracelets.

Another former WSOP Main Event champion, Phil Hellmuth, also created history by winning his 15th bracelet in a US$5,000 No Limit Hold’em event, putting him well clear of his nearest rivals – Phil Ivey, Johnny Chan and Doyle Brunson – with 10 bracelets each. And Michael Mizrachi, who reached the final table of the 2010 WSOP Main Event, won the esteemed US$50,000 Poker Players Championship for the third time – an event considered to be the ultimate test of a player’s skill.

The 2018 WSOP Main Event was the second largest in history behind only the 2006 event which attracted a monster field of 8,773 players.