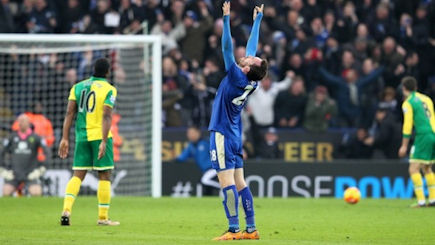 Leonardo Ulloa’s 89th-minute goal against Norwich City sent Leicester City five points clear at the top. It was a truly remarkable week for the Foxes, as both Arsenal and Tottenham Hotspur lost crucial points while the Premier League leaders were marching on.

A study in England claims that the celebrations of Leicester City fans to Ulloa’s winning goal and their jumping up and down caused a 0.3 magnitude earthquake! Leicester moved to 60 points after 29 games and by this rate are on track to reach 78 points at the end of the season. Not long ago, Manchester City manager Manuel Pellegrini predicted the winner of the season will acquire a very low points total compared with previous season’s winners and when pushed by the press said 75 points would win the title. So here we go – Leicester City is now very close to one of the most sought-after trophies in the world! Pellegrini redeemed himself from three consecutive league losses and a 3-0 thrashing at the hands of Liverpool with an easy 4-0 win over bottom club Aston Villa. It was not an even competition considering how pathetic Villa has been and it is clear they have already given up their fight for survival. But the sight of Sergio Agüero returning to his best with two more goals to make it 10 goals in his last 10 games must please the Chilean as crucial Champions League matches are coming up.

The North London derby lived up to its promise as one of the most entertaining match-ups in England. Four brilliant goals, one red card, breath-taking intensity and lightning speed in attack – it was a football feast for the fans. Harry Kane’s wonderful strike, albeit from an offside position, was cancelled out by Alexis Sanchez’s goal while Toby Alderweireld and Aaron Ramsey scored another two goals for each side. The 2-2 scoreline appeared a good result for both sides considering how tough the derby is, but this year is different.Embroiled in a title fight, both managers would be very disappointed to trail off Leicester City even further. Meanwhile, Manchester City, Manchester United and Liverpool will fight for the final position in the top four. Liverpool’s fightback at Crystal Palace means they have won three games in a row for the first time this season. And Louis Van Gaal will keep worrying for his position at United after they suffered a 1-0 loss against West Brom – a result that showed just how far the Red Devils have fallen since the retirement of Sir Alex Ferguson.