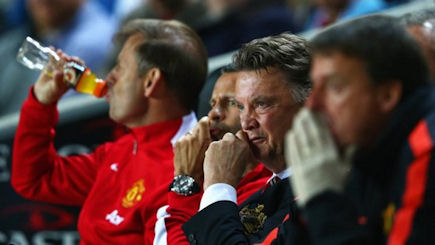 Shortly after Manchester United was humiliated by League One club MK Dons in the second round of the League Cup, they officially announced the transfer of Ángel Di María from Real Madrid for a British record £59.7 million – as if the news would somehow make the disgusted fans happy. The truth is, even 33-year-old Karl Robinson, the young manager of MK Dons, was able to exploit the weakness of three defenders in Van Gaal’s 3-5-2 system which the Dutchman labeled as the best system to use for the current United squad. It’s not the first time Van Gaal’s three-man defensive line has failed this season given they have scored only one goal and conceded seven in three matches so far. Gus Poyet, the Sunderland manager, commented last weekend that the Dutchman’s system might have come a year late given that a few clubs, including Hull City and Sunderland themselves, experimented with three defenders last season and it has therefore lost its surprise element.

Tactically savvy, Van Gaal is able to switch between different formations when necessary. Liverpool manager Brendan Rodgers once said he was a big fan of Van Gaal’s Barcelona side which played 4-3-3. United’s manager explained the reason he deployed two central forward in a 3-5-2 formation, was that he wanted to make the best use of Robin Van Persie and Wayne Rooney at the same time. But their shambolic defending is a counter reason that a back four may be the better solution.

It will take time for Manchester United to crawl back up the league ladder as they are sitting at 13th place after two games and are suffering from low confidence. Meanwhile, Tottenham Hotspur look revitalized under the guidance of Mauricio Pochettino. They are currently sitting top of the table thanks to goal difference with Chelsea, Manchester City and Swansea the other three teams to have grabbed maximum points so far this season. Liverpool, last season’s runner-up, appeared a little toothless after the departure of Luis Suárez to Spain, in a 3-1 loss against classy Manchester City on Monday in an early showdown of two title contenders. Mario Balotelli, the former controversial City and AC Milan striker who moved to Liverpool on a £16 million before the match, witnessed the defeat up from the stand and may wonder if he is the man that will answer Rodgers’ call.

The loss was a bitter-sweet one for the Reds who clearly missed the finishing ability of Suárez but should take confidence from the fact they were the better team for large patches of the game.