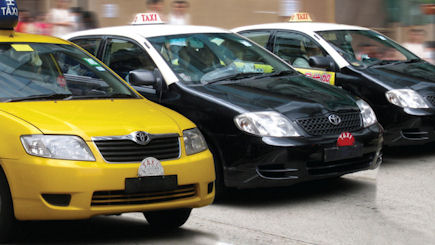 Taxis have become a huge problem in Macau. Not only are there not enough of them to fulfil demand, unscrupulous drivers are taking advantage of visitors and frustrating the locals by refusing short fares, taking lengthy “detours” and demanding off-meter fares of as much as 10 times the legal price. WGM takes an in-depth look at the problem. The problem of finding a taxi in Macau has existed for a number of years without any real signs of improvement. In fact, things have become worse than ever over the last year or two and especially in the last six months. Bad behavior in the taxi industry continues to flourish and spread like a cancer, frustrating locals and tourists alike and giving the Macau tourism industry a black eye it doesn’t need. If it continues unabated, Macau will no longer be renowned as one of the world’s tourism and leisure centers but as the world’s “rip-off center”.

Here are five sins committed by the black sheep of Macau’s taxi industry:

WGM recently spoke to a number of disgruntled passengers about their experiences. Sarah and Marco, from Italy and the UK respectively, told us, “When we visited Macau for the first time, we already knew about the taxi issues from searching for travelling information on the internet. But it still took us half an hour to get a taxi at Praça de Ponte e Horta. The driver asked about our destination first and only agreed to take us when he knew we were going to the airport.”

Mr Lu, from Hong Kong, said, “Once I needed a taxi in the old town area and couldn’t get one after waiting for over an hour. In the end I walked to Avenida de Almeida Ribeiro where I finally managed to get a taxi to go to the Venetian.”

Macau local Ms Guan said, “I have lots of experiences of being refused. I’m very unhappy about the service of Macau taxi drivers. They prefer visitors, because they think they can take the long route and ask for higher prices. Quite often they pretend to not see me waving and intentionally make turns to avoid me on purpose. Once I was waiting for a taxi in front of Lisboa at night. I told the driver I was going to the border gate and he asked for MOP$100. When I tried to call a taxi, I was always told there was no taxi available.

Qiang has been a night shift taxi driver for five years. Although he asked not to be photographed, he told us, “Taxi drivers breaking the rules is true, and mainly happens with the night shift, especially during the period of 17:00 to 20:00 when drivers hand over to the next shift. Taxis in operation during this period are halved. At the same time, it is the peak time for visitors going out for dinner. The demand for taxis is extremely high during this period of time. However, about 70 percent of taxis are ‘not in service’ and wait for customers at Avenida de Almeida Ribeiro or Zona Nova de Aterros do Porto Exterior. They charge MOP$50 for short trips and MOP$100 to MOP$150 for trips across islands. After 20:00, most taxi drivers will go back to normal and take passengers by the meter.

Clearly bad tendencies prevail in Macau’s taxi industry. Fundamentally, one of the main reasons is a serious shortage of taxis in Macau. Before Macau was returned to China in 1999, it had a population of around 300,000 and the number of annual visitors was only about 8 million. Back then, Macau had 750 taxis. Now the population has doubled to 600,000 while the number of visitors has surged to over 29 million in 2013 according to official figures. Despite this, the number of taxis has risen only marginally to 1,180. The government and the Director of the Macau Transport Bureau (DSAT), Wong Wan, have to share part of the blame for this, with outdated taxi policies and inefficient regulations. The good news is that they have at least started to address the problem. DSAT and the Macau Office of Legal Affairs (DSAJ) have initiated a public consultation period to review the taxi passenger transport system from 9 August to 23 September. Four key aspects of this include:

Regarding the most controversial aspects of this, the undercover system, the Director of DSAJ, Zhang Yongchun, emphasized the undercover officers planted to combat illegal taxi driver behavior were simply searching for evidence without revealing their identities. They are not trying to lure taxi drivers to overcharge. For example, law enforcement officers take taxis pretending to be visitors. If the driver asks for a big price or takes “detours”, the officers can reveal their identity and obtain evidence. Macau law allows for the undercover system, but the method must be passive. Instigating or inducing the crime is prohibited. However, while we wait for the Macau government to improve the system, there are some rules you can follow to make it easier to find a taxi in Macau and avoid being ripped off.

Local Macau residents are fighting back against dishonest taxi drivers with the establishment of the “Macau Taxi Driver Shame” (MTDS) Facebook Group, which is now evolving into the Macau Taxi Passengers Association – a formal community association registered under Macau law.

A local man founded the Facebook group on 30 June 2014 after he and his heavily pregnant partner were forced to wait for hours in the heat while tourists bought numerous taxis just metres away by bribing taxi drivers. Initially it was just a place to vent his anger but within an hour 100 people had joined to support the founder, loudly proclaiming their anger and frustration. Within two days 500 had joined. Today, the group has over 2,000 members irate with Macau taxi drivers and demanding something be done. MTDS members started posting descriptions, pictures and videos of bad Macau taxi driver behavior and the group has even published a Black List of 73 bad Macau taxi drivers. Members of the group report overcharging, dangerous driving, poor quality taxis, rude and aggressive drivers and even serious violence. But the most frequent problem is the practice of “fishing” where drivers refuse passengers unless they pay up to 10 times the legal metered fare.

Administrators of the MTDS group have now announced the establishment of the Macau Taxi Passengers Association – for more information please visit Facebook and search for “Macau Taxi Driver Shame”.