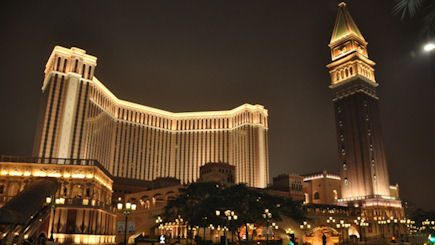 Sands China Ltd has become the first of Macau’s operators to successfully generate increasing returns through a focus on mass market clientele, with mass now contributing a record 84 percent of the company’s revenue according to a report released by Bloomberg.

Sands has also seen its non-gaming contribution almost double with non-gaming activities now comprising 18 percent of total revenue ahead of Melco-Crown with 13 percent and Galaxy with 10 percent. Providing his detailed analysis into Macau’s 4th Quarter 2015 results, Bloomberg Insights analyst Tim Craighead said that the opening of Galaxy Phase II and Melco’s Studio City last year was starting to create positive impact in Cotai with their “clustering effect” aiding all operators in the area. Sands properties The Venetian and Sands Cotai Central are both located on the Cotai Strip with a third, The Parisian, due to open in 2016.

“With the ramp-up of Galaxy’s Phase 2 and Studio City, casino revenue at the Venetian rose sequentially,” Craighead said. “This may be due to the clustering effect as Cotai draws more visitors as a leisure destination.

Craighead said that vastly improved results in Cotai during Q4 2015 despite the increased competition was proof that Macau’s gaming market is finally starting to stabilize.