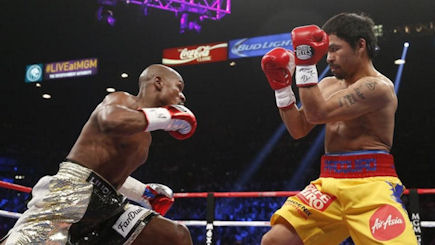 Will there be a rematch? The question has burned ever since Floyd Mayweather did what most expected he would do – but most hoped wouldn’t – by scoring a comfortable points victory over Manny Pacquiao. Under normal circumstances, the answer to this question would simply come down to whether or not Mayweather felt it necessary to risk his perfect 48-0 record against the one man theoretically capable of beating him. Mayweather has one more fight left under his current deal with Showtime and CBS and has signaled it will definitely be his last, meaning he can basically pick who he wants, score an easy victory and retire as one of the all-time greats with a perfect 49-0 record.

That’s what they call the “smart money”. After all, in the ring at least, Pacquiao would have everything to gain and Mayweather everything to lose should they fight again.

But then there’s the “real money”. The official figures for the Mayweather-Pacquiao fight earlier this month came in last week and stunned even the most generous analysts with the sheer volume of revenue it produced. Shattering pre-fight predictions of somewhere between 3 and 3.8 million pay-per-view sales in the United States, the final total was 4.4 million – slashing the previous record of 2.48 million set in 2007 when Mayweather fought Oscar de la Hoya.

TV revenue brought in well over US$400 million alone, with overseas rights, merchandise sales, sponsorship and other streams boosting total revenue to just under US$600 million. Of that, Pacquiao is expected to receive around US$143 million and Mayweather a whopping US$210 million – not bad for 36 minutes work! And that’s the catch. Mayweather has one more fight left in him which means one more big payday on offer, but there’s big and there’s BIG. Should he take the easy option against a lesser fighter he’ll still make some handy cash and drift into the rest of his life without a care in the world, but adding another US$200 million to the piggy bank against Pacquiao might just be too hard to refuse.

WGM certainly thinks it will be, so let’s buckle up and wait for the next big announcement!