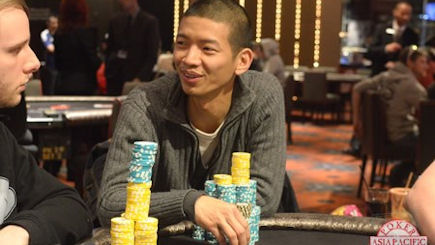 We’ve been pleased in recent months to be able to bring you news of regular record fields being set at the various events held at PokerStars LIVE Macau, with the Macau Poker Cup, ACOP and APPT tournament series becoming more popular with each year. We haven’t necessarily been able to say the same about some other events across the Asia-Pacific region, so we were more than a little excited to see the numbers come in from this week’s ANZPT Melbourne event currently being held in Melbourne.

Now in its sixth season, ANZPT Melbourne 2014 will not only go down as the biggest ANZPT event ever but also the first time the prize pool has topped AU$1 million. The 514 starters across the two flights have created a total prize pool of AU$1,032,000. As of the end of Day 2 overnight, 32 players remain with Vincent Chua topping the chip counts and in pursuit of the AU$253,000 first prize.