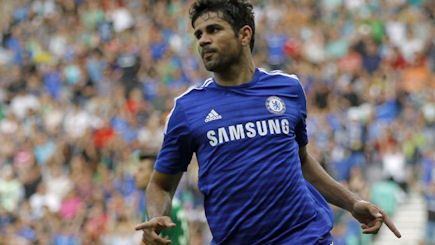 The new English Premier League season is well and truly underway, but while it’s been business as usual for the likes of Chelsea, Manchester City and Liverpool over the opening three weekends, it’s hard to remember too many transfer windows as fascinating as the one just passed. After a summer dominated by the 2014 World Cup in Brazil, the pace certainly picked up in the final few weeks as England’s biggest clubs frantically tried to fill any remaining gaps in their squads.

For some, such as Chelsea, the summer transfer window couldn’t have gone smoother. Desperate to add more goal-scoring potential to their squad, they had signed Spanish duo Diego Costa and Cesc Fabregas as early as mid-July, welcomed back Didier Drogba soon after and completed their dealinsg with a successful late play for French striker Loic Remy. Diego Costa has scored 4 goals in 3 games for Chelsea

Manchester City had less room to move under FIFA’s Financial Fair Play restrictions but also completed their business early on. Both sides have started the new season solidly as expected, albeit with a last-start slip-up by City against Stoke.

But elsewhere there are still plenty of questions yet to be answered and from where we sit it is England’s other big three – Manchester United, Arsenal and Liverpool – who will be hoping their pre-season spending sprees prove to be money well spent. So what can we expect? Let’s take a closer look at each.

There have been big changes afoot at Old Trafford this season following the disastrous 12-month reign of former manager David Moyes and time will tell whether new boss Louis van Gaal can steady the ship. Needless to say, any hopes that a change in manager would quickly lead to a change in fortune have already been dispelled. Handed what many claimed was the perfect draw over the opening weeks with which to rebuild their confidence, the Red Devils have instead endured a nightmare start with a 2-1 loss to Swansea and disappointing draws against Sunderland and Burnley. Will Angel Di Maria be the man to turn United’s fortunes around?

On sheer quality, it’s hard to top United’s acquisitions and in his maiden appearance for his new club Di Maria was far and away their best player with his pace and precision passing.

But depth remains a concern. The dominant club in England for so long, they’ve swayed between mediocre and inept so far this season and although the class of their new arrivals will be enough to win them more games than they lose, they still look weak defensively and will struggle to dominate rivals like they used to. Nevertheless, we can’t wait to see Di Maria and Falcao together.

The arrival of Alexis Sanchez from Barcelona to bolster a squad that showed promise last season had many predicting big things for Arsenal in 2014/15 – and if they can stay fit and healthy that may well be the case – but it’s been a sluggish start from the FA Cup champions with an opening day win against Crystal Palace followed by consecutive draws at Everton and Leicester. The key for the Gunners will be depth after a series of injuries derailed their otherwise promising start last season and in that pursuit they’ve done well to bring in the likes of David Ospina, Mathieu Debuchy and Calum Chambers alongside Costa Rican World Cup star Joel Campbell who returns after a loan spell in Greece.

While Sanchez’s arrival certainly has the London club excited, they will also need home grown talents Jack Wilshere, Theo Walcott and Aaron Ramsey to be at their best if they are to overcome their biggest stumbling block from last season – a failure to perform against their title rivals. Three outings were particularly telling, starting with a 6-3 loss to City in December and getting gradually worse as they lost 5-1 to Liverpool and 6-0 to Chelsea in games that were all but over by half-time. Although the Gunners appear on the surface at least to have recruited wisely, time will tell if their new arrivals can help bridge the gap.

When Liverpool farewelled their spectacular 2013/14 season with a 2-1 win over Newcastle on the final day to fall just three points shy of a maiden EPL title, most fans expected the focus of manager Brendan Rodgers to be on fixing his side’s leaky defence. Unfortunately, that all changed when Luis Suarez got bitey again in Brazil – his lengthy FIFA suspension ultimately forcing Liverpool’s hand in selling their star talisman to Barcelona for a whopping £75 million. From that moment, Rodgers found himself looking for a new source of goals with Southampton’s Rickie Lambert and Serbian winger Lazar Markovic among a host of new arrivals and the club being linked with just about every striker on the planet.

And who have they ended up with? None other than the mercurial Mario Balotelli. The former Manchester City and AC Milan star is a curious choice for this Liverpool squad and questions linger over whether he was the wisest choice. The Reds had the opportunity to sign French striker Loic Remy but pulled the deal off the table after he failed his medical – a decision that still has Remy scratching his head. Chelsea didn’t waste the chance and signed him instead. What will Mario Balotelli produce for Liverpool?

More frustrating for the Kop was Rodgers’ failure to doggedly pursue Radamel Falcao after entering early talks with his club side Monaco. Falcao was quickly swooped upon by Manchester United instead and there could be no greater dagger to the heart of Liverpool fans than to see the Colombian start scoring regularly for their bitter rivals.

Defensively, the Reds have brought in Spanish duo Alberto Moreno and Javi Manquillo and although they have still looked shaky at the back, they at least boast a lot more speed in defence this season – as evidenced by Moreno in their 3-0 win at Tottenham when he scorched his way up the left touchline before unleashing a wicked shot into the bottom right corner.

Likewise, the main positive for Liverpool over the opening weeks is that the lightning fast style they used to demolish so many sides last season is still in place and operating efficiently with the combination of Raheem Sterling, Daniel Sturridge and Jordan Henderson suggesting the future remains bright. The signature of impressive young Southampton midfielder Adam Lallana is also a positive one, however if Liverpool are to stay in touch with City and Chelsea this season they will need someone who can reliably find the back of the net. Is Balotelli that man? The only certainty is that we won’t be able to take our eyes off the unpredictable Italian as we wait to find out.

THE BEST OF THE REST

The two clubs knocking on the door of the “big five” in recent seasons have been Everton and Tottenham and both have been reasonably active over the summer, although neither is likely move any further up the pecking order just yet. Everton’s primary point of business was to complete the permanent transfers of Gareth Barry and Romelu Lukaku from City and Chelsea respectively after the pair played a key role for the Toffees last season, while veteran striker Samuel Eto’o is an interesting acquisition and should be good for a few goals even if his best days are behind him.

Tottenham began the pre-season by announcing Mauricio Pochettino as their new boss and the former Southampton manager made it known he was keen to plug a defence that, like Arsenal, had struggled against the big guns. Last season they conceded 11 goals in their two games against Manchester City and nine against Liverpool as well as suffering a 4-0 loss at Chelsea. Plenty of excitement greeted the arrival of Sevilla defender Federico Fazio and with four wins from four games in all competitions to start the new season the early signs were good, but they failed their first big test when hammered 3-0 by Liverpool at White Hart Lane last start, so it seems there is still a long way to go.