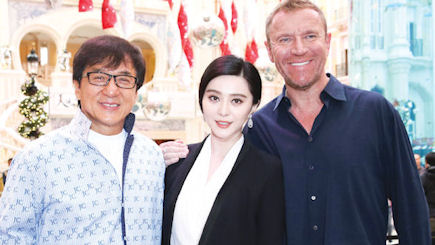 Macau has become a regular stopover for the world’s biggest stars in recent times and the past few months have been no exception. Having already visited in mid-2014 for the red carpet opening of their film The Expendables, action greats Arnold Schwarzenegger and Sylvester Stallone were back alongside Stephen Baldwin to watch Manny Pacquiao’s fight with Chris Algieri ringside at the Venetian Macao.

Also spending some time in Macau was martial arts legend Jackie Chan, who shot a number of scenes for his upcoming movie Skiptrace in and around MGM’s Grande Praça alongside actress Fan Bingbing and director Renny Harlin.

Football legend David Beckham was back again, this time to speak to Sands China Ltd staff about the secret to his success both on and off the pitch and to attend a football clinic with 40 youths from Macau’s Under-15s and Under-17s football teams.

And there was plenty to celebrate in the poker world with a couple of big parties welcoming players to some of the biggest events in Asia – the World Poker Tour’s new Philippines leg and Macau’s Asia Championship of Poker.

What an exciting way to round out the year! David Beckham presented a signed copy of his book to Chang Chin Nam, Vice President of the Macau Football Association, at a football clinic organized by the Sands China Community Academy Party organizer and friend of WGM Ben Abrahams is interviewed by Calvin Ayre (above), while party goers including WPT expert analyst Tony Dunst celebrate at the WPT party (below) There were beautiful girls galore at WPT National Philippines