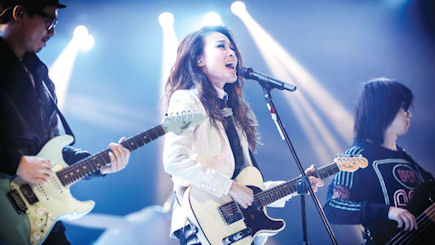 The Christmas and New Year period tends to see the pace slow in many cities around the world, but not in Macau where the stars have come out in force over the past few months.

Front and centre were the 15th Huading Awards which returned to Macau this year after being held in Hollywood in 2014.

Recognizing the best talent in Asian film, television and music, the awards attracted a who’s who of the local entertainment scene with the likes of Dicky Cheung, Donnie Yen, Charmaine Sheh, Leehom Wang and Han Ye Seul among the big names in attendance. There was an international flavor as well with Hollywood stars Chris Hemsworth and Naomi Watts lighting up the red carpet.

Also luring the big names was the Macau and Hong Kong premiere of DreamWorks’ latest animated feature film Penguins of Madagascar with local boxers KK Ng and Rex Tso among the invited guests.

Music fans were treated to some very special performances to celebrate New Year’s Eve at the Venetian with ’70s icons KC and the Sunshine Band thrilling revelers, while Hong Kong singer Joey Yung was another to visit Macau’s shores with a thrilling performance at Cotai Arena. The 15th Huading Awards saw the best of both local and international talent on hand to celebrate Asia’s film, television and music industries Australian actress Naomi Watts was one of the international guests honored The Macau and Hong Kong premiere of Penguins of Madagascar saw stars of film, television and sport take to the red carpet at the Venetian

KC AND THE SUNSHINE BAND