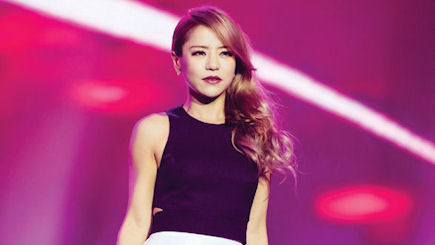 The stars shone brightly in Macau in the lead-up to summer with the reigning queen of pop Katy Perry leading the way. Perry wowed fans at Cotai Arena over two nights with her dazzling array of costumes and spectacular new stage design – all part of her hugely successful “Prismatic World Tour”

It proved to be a big few months for music in Macau with the Venetian also playing host to the 19th Channel [V] China Music Awards. Asia’s top musical acts were joined by a long list of celebrities for the awards, including Jackie Chan, Wang Feng, Karen Mok, Zhou Bi Chang, Alex To, Ella Chen, MoMo Wu and Della.

A slightly more mature crowd gathered at Broadway Macau, with Cantopop legend Alan Tam performing the very first event to be held at the newly opened Broadway Theatre as part of his 40th Anniversary World Tour.

Animal lovers jumped at the chance to see world famous dog behavior expert Cesar Millan perform his one-man show in Macau for the very first time. A special doggy casting call was held in the lead-up with a number of lucky dogs chosen to join Millan on stage at his show, where he demonstrated techniques to fix common behavioral issues.

And popular cooking show “Celebrity Masterchef China” came to Macau to film an episode of the show that has taken the country by storm. Celebrities showing off their culinary skills this season include Zhang Liang, Mike He, Kristy Yang, Bai Kainan, Wang Lin, Zhu Dan, Xin Boqing and Ye Yiqian. Bai Kainan, Mike He, Zhu Dan and Kristy Yang were among the celebrities in Macau to film the sixth episode of Celebrity Masterchef China’s second season