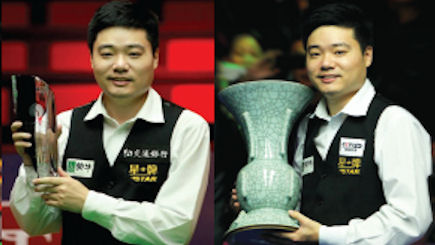 Having hinted at his unbridled potential over the past 10 years, China’s snooker superstar Ding Junhui etched his name among the game’s greats in 2013/14 by winning a record-equalling five rankings titles. And there could be much more to come this year with Ding among a wave of Chinese players making the world take notice.

Although the local fans soon forgot about it as English duo Mark Selby and Ronnie O’Sullivan marched towards the World Championships final in early May, it’s fair to describe Ding Junhui’s first round exit at the season-ending tournament in Sheffield, England as one of sport’s great anti-climaxes of 2014.

A cursory glance at The Crucible Theatre’s backstage honor board shows that of the 79 previous occasions the World Championships had been held, British players had won the title 76 times and there had certainly been no sign of an Asian player breaking through since it was first contested in 1927. In fact, Junhui’s semi-final appearance in 2011 remains the best ever showing by an Asian player at snooker’s most prestigious event and, with the exception of Australian Neil Robertson’s victory in 2010, it’s now 31 years since a non-British player even reached the final!

It seems strange then that Junhui’s early exit would even go so far as to raise an eyebrow, but there is a reason his performance at this year’s World Championships was so eagerly anticipated. Only a few weeks earlier the 27-year-old had become just the second player of all time to win five rankings events in a single season, so victory in Sheffield would have seen him move past the mark first set by Stephen Hendry in 1991/92 to stamp his own place in history.

Even so, Ding’s performance over the past 12 months has been nothing short of remarkable. Between February 2004, when he was granted a maiden wildcard into The Masters in London, and May 2013 when his record-breaking season began he had only won six rankings events, so he almost doubled that in one year.

His wins at the Shanghai Masters, Indian Open and International Championship saw him become the first man since 1990 to win three rankings events in a row and his world ranking skyrocketed from number 10 in the world at the start of the season to number two by the end.

With 11 rankings events now to his name, he has already moved up to sixth on the all-time list with plenty of good years ahead.

Having held the mantle of China’s number one player for a full decade now, there is every chance he will stand top of the entire world by the end of 2014.

But Ding’s feats could be just the tip of the iceberg with widespread predictions that China will soon dominate world snooker much like the British have for the past 85 years. To be fair, such talk has been around for a few years now without any of it coming to fruition, however like DIng himself, clear progress has been made over the 2013/14 season.

Most notable was the first ever all-Chinese final in a rankings event when Ding defeated Xiao Guodong to win the Shanghai Masters, which was quickly followed by a second all-Chinese final just two events later as Hong Kong’s Marco Fu faced off against Ding at the International Championship.

There are currently 16 Chinese tour professionals with the promise of many more to come following the launch of China’s first ever snooker coaching academy in Beijing early last year, aimed at assisting in the rapid growth of snooker. As usual, when the Chinese government decides to get on board they don’t muck around and Chinese players enjoy a level of financial support that those from other nations can only dream of.

Of course, Ding is to thank for that, having captured the imagination of the Chinese people when he burst onto the scene by winning the China Open as a fresh-faced 18-year-old in 2005. The final against Hendry that year was shown live on China’s sports channel CCTV-5 and was watched by 110 million people – an audience the World Professional Billiards and Snooker Association had previously never thought possible.

Yet, if anything, the next batch of emerging young Chinese players could be even more exciting. They include Lu Haotian, who became the youngest player to win a professional televised match in 2012 at just 14 and reached the quarter-finals of the International Championship soon after at the same age. Another prodigy, Yuan Sijun, was handed a wildcard to last September’s Shanghai Masters at just 13.

There is no doubt China has made its presence felt on the global sporting stage in recent times with the likes of tennis champion Li Na, former NBA star Yao Ming and badminton great Lin Dan famous the world over. With Ding leading the way, it looks like snooker could be the next sport to fall to the Chinese invasion.