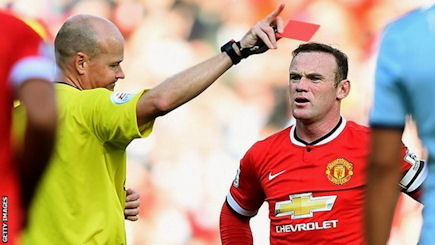 Manchester United returned to the winner’s circle by beating West Ham United 2-1 at home on Saturday with Wayne Rooney and Robin Van Persie scoring for the home side. It wasn’t an easy win and eight attempts on goal won’t have satisfied a home crowd who expected their new Dutch manager and players like Radamel Falcao and Angel di Maria would to bring breath-taking attack back to Old Trafford. Rooney saw red as he lost his temper

Nevertheless, it was a great moment for Luis Van Gaal as he saw his team leapfrog old rival Liverpool into seventh place on the league ladder, while debutant Patrick McNair produced a solid performance. But Rooney’s red card for a reckless tackle on Stewart Downing in the 59th minute spoiled the moment and he now faces a three-match ban. Still, Juan Mata, who lost his place after Van Gaal moved Rooney to attacking midfielder behind Falcao and Van Persie, will cherish this golden opportunity. Elsewhere, league leaders Chelsea cruised to a 3-0 win against Aston Villa. Diego Costa appears a fearful presence in any opponent’s box, scoring another goal and creating the chance for Willian to make it three. With eight goals from six games, Costa is a hot favorite for Golden Boot in his maiden season in the Premier League. Manchester City and Southampton, the two clubs from the remaining top three, beat Hull City and Queens Park Rangers respectively.

The two local derbies last Saturday were less impressive. Liverpool and Everton didn’t reach their high standards of last season and with their defensive lines too fragile to count on, it was understandable that both Brendan Rodgers and Roberto Martínez were less ambitious in going forward, especially the away team. Steven Gerrard’s brilliant free kick should have been enough to bring Liverpool a derby win, only to be cancelled out by Phil Jagielka’s thunderbolt strike in added time.

In north London, Tottenham Hotspur was happy to leave with one point in hand after a 1-1 draw at Arsenal. Arsène Wenger must be ruing that several key players like Mikel Arteta and Aaron Ramsey were added to the long injury list with a crucial Champions League clash against Galatasaray awaiting mid-week.