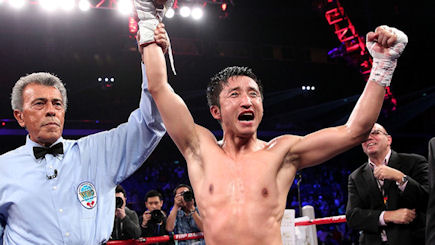 In only his fifth professional fight and just 15 months after his professional debut, two-time Chinese Olympic gold medalist and national icon Zou Shiming will not only make his 10-round debut but will also be fighting for his first professional title in the main event of Champions of Gold, this Saturday 19 July at The Venetian Macao’s CotaiArena. The World Boxing Organization (WBO) announced recently that it will sanction Shiming’s upcoming fight against Luis De La Rosa of Colombia for the Special Elite WBO International Flyweight Championship. A victory over De La Rosa could propel the number three world-rated Zou Shiming toward a shot at a world title, which is certainly the aim of his promoters as they look to ensure the 33-year-old becomes China’s next sporting icon.

While four of De La Rosa’s last six victories have been by way of knockout, Shiming collected his first professional knockout victory on in his last visit to CotaiArena on 22 February when he stopped Yokthong Kokietgym in the seventh round. The Special Elite WBO International Flyweight Championship is only sanctioned for bouts that feature a fighter of elite stature such as Shiming, who has won three World Amateur Championships in addition to his two Olympic gold medals. Though the list is small by design, past recipients of this honor include Manny Pacquiao, Juan Manuel Márquez and Vasyl Lomachenko, who fought for this prestigious title before challenging for a world championship.

Tickets to the Champions of Gold can be booked online at www.cotaiticketing.com, and are available in seven categories, ranging from HK$80 to HK$4,680.