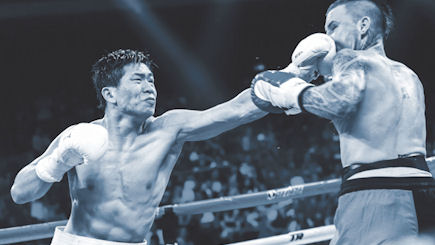 Manny Pacquiao has long flown the flag for boxing in Asia and if the sport is to conquer China then dual Olympic gold medalist Zou Shiming is going to have a lot to do with it. But they’re not alone. At just 24 years of age, Kuok Kun Ng is Macau’s only professional boxer after making his pro debut in May 2013. With five wins from five fights so far he is quickly making a name for himself. WGM’s Managing Editor Ben Blaschke caught up with “KK” to discuss his past, present and future in the boxing ring. Ben Blaschke: Hi KK, thanks for speaking with WGM ahead of your next fight at the Clash in Cotai II at the Venetian Macao on 23 November. You’ve now had five fights for five wins since making your debut last year. How much do you think you’ve improved as a fighter since your first professional fight last year and what can we expect to see from you in this upcoming fight?

KK Ng: Well of course I’m hoping to achieve my sixth consecutive win in the upcoming fight and continue to maintain my unbeaten record. I think I have improved a lot. At the beginning, I was an amateur fighter and had lots of things to improve such as physical fitness, power, speed, technique, mentality and so on. I needed to change from inside out to turn professional, and all of those areas have improved. The most obvious aspect is mentality, from my unwillingness to train at the very beginning to full commitment now.

BB: What do you believe are your greatest strengths in the boxing ring?

KK: In the ring, my biggest faith is to manage to knock out my opponent and let the benefits of my training show. It’s all about hard work.

KK: Yes, I grew up in Macau. I remember there was no boxing club to do any training. My coach found a place near a park. It was a very shabby training place. Sometimes we went directly to the park for training and people passing by would look at us with strange eyes but he persisted in training us there. I didn’t think too much back then. I just felt happy to have someone to teach me, to be able to train and to make the effort together with a group of people. BB: Macau looked very different when you were growing up than it does now. As a local, what has it been like watching Macau’s transformation over the past 10 years?

KK: How fast things have changed. Now it is a city with all these tall buildings next to one another. An inch of land values an inch of gold. It wasn’t like this 10 years ago but this is what’s needed for development. More investment projects and developers can drive Macau’s economy. That is why professional fighters come to Macau – because it has evolved into what it is today.

BB: You first started boxing at the age of 13. What attracted you to boxing?

KK: I was very lively and active when I was a child. I loved sports, but didn’t choose boxing specifically. It was by accident. But the technique, fighting, attacking and defense in boxing deeply attracted me.

BB: When did you first start to think of boxing as something you might be able to do professionally?

KK: I actually didn’t think it is feasible to turn professional until the Venetian Macao and Top Rank invited me to compete last year. I am very grateful for the opportunity they have given me. BB: You didn’t have a lot of amateur fights. Did you feel you were taking a risk by turning professional so early?

KK: I admit that I’m an amateur without lots of amateur fight experience. Lots of overseas fighters have rich experience in competitions such as the Asian Games. However, in Macau I didn’t have the qualifications to participate in those big events. I’m an athlete outside the system. Professional boxing is a brand new direction. I want to take a risk and give it a try.

BB: How do you feel about the fact that you are Macau’s only professional boxer? Is that a big motivating factor for you when you step into the ring? BB: Your first professional fight was in Hong Kong but your second was on home soil in Macau. How did it feel to hop into the ring for that fight against Youjie Zeng in front of your home crowd for the first time?

KK: That was my first time to participate in a world game on my home soil. I was so nervous that I couldn’t even speak a word! But I had the voice and strength of my supporters which made me even more determined to make them proud.

BB: Do you dream of fighting in Las Vegas or do you think Macau is going to become the new home of boxing?

KK: Las Vegas is the best place in the world to compete, but now Macau is also developing into a world-renowned venue for boxing. Both are great.

BB: Who has had the biggest influence on your career and why?

KK: My father. He passed away last year and it was a very difficult time for me. It made me very depressed and it was hard to find the motivation to train.

BB: Over the past year or so you’ve had the chance to spend some time with legendary trainer Freddie Roach and the great Manny Pacquiao. What have you learnt from these two legends of boxing?

KK: Unfortunately I didn’t get to do pair training with Manny. Freddie Roach gave me some guidance, but it wasn’t for long, so my learning was limited. However, I could see the training methods and time arrangement of Manny just by watching him and that has helped improve my own training.

BB: What have you been working on in particular for this upcoming fight?

KK: My physical fitness, power and speed but no technique in particular. BB: With Zou Shiming turning professional around the same time you did, boxing seems to be getting more popular in this part of the world. Do you think boxing has a bright future in Asia?

KK: I think boxing will prevail in Asia. With the promotion of Top Rank, the support of the Venetian Macao and Filipino legend Manny Pacquiao – who has set a record no one can match and won the title in eight weight classes – competing in Macau, boxing has been recognized by more and more people in Asia.

BB: How important has the Venetian’s support of boxing, with a number of big fight nights held at Cotai Arena over the past 18 months, been in helping your professional career?

KK: Of course it has helped a lot. Personally I’m very grateful to the Venetian Macao. I wouldn’t be anywhere without them. BB: Aside from yourself, Rex Tso has also enjoyed a great start to his career and obviously Zou has a big following. Are you friends with Rex and Zou? Do you spend much time with them away from boxing?

KK: We are boxers competing in the same place. Of course we are friends and support one another. Zou is the idol of Chinese boxing and it’s an honor to be friends with him and Rex. We mostly see one another at the competition occasions, at press conferences and so on.

BB: Macau is known as the gaming capital of the world, but away from gaming what are your favorite things to do in Macau?

KK: My favorite thing to do in Macau is playing football – football matches with a few good friends.

BB: If someone who wasn’t from Macau was visiting for just one day, what would you recommend to them as a “must do”?

KK: They can visit the Venetian Macao! But besides gaming there are also lots of shops, multicultural dining, exhibitions and shows. Or they can go to Rua do Cunha in Taipa Village. They can find some local Macau specialties and gifts there. If they want to do sightseeing, they can go to the Ruins of St Paul’s, Monte Forte, Guia Lighthouse and so on.

BB: What do your friends in Macau think of you being a professional boxer?

KK: My friends have been giving me unlimited support. As none of them have reached the professional level, they hope their friend can achieve his aspiration and make a contribution to Macau.

BB: What would be your dream fight – who would you most like to fight in the future?

KK: Of course the fight with the world champion of my weight class – former WBC and WBA super welterweight champion Canelo Alvarez who is 44-1-1 with 31 knock-outs! He should be able to knock me out pretty quickly! BB: Finally KK, what are your long term goals as a boxer?

KK: I hope to continue fighting and strive for the belt in my weight division.