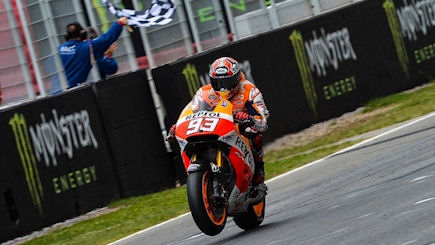 In two weeks’ time, MotoGP world champion Marc Marquez will head to Indianapolis looking to make it 10 wins from 10 races in 2014. The 20-year-old Spaniard became the youngest rider in history to win nine in a row when he took the chequered flag in Germany last week to maintain his perfect record through the halfway point of the season and the freakish prospect of him going through the entire year undefeated is starting to loom as a very real possibility. Should he win in Indianapolis, Marquez will become just the fifth rider to have won 10 premier class races in a row alongside Mike Hailwood, John Surtees, Mick Doohan and the great Giacomo Agostini who won a record 20 in a row in 1968 and 1969.

And it got us thinking about other great sports winning streaks such as the LA Lakers’ 33 NBA wins in a row during the 1971-72 season and Turkish horse Kincsem who won a phenomenal 54 races from 54 starts in the 1870s.

But as winning streaks go, there are five that stand out as our all-time favorites:

Roger Federer may be the greatest player of all time, but when it comes to clay there has been none better than his old rival Rafael Nadal. Nadal’s clay court record is nothing short of remarkable and he put his mastery of the surface to good use with 81 consecutive wins between April 2005 and May 2007. But for a shock loss to Robin Soderling in the fourth round of the 2009 French Open, he might also have celebrated a ninth consecutive title at Roland Garros earlier this year. Since winning the 2005 French Open at his first attempt, Nadal has won the tournament eight times in nine years with a match record of 66-1! One of the all-time great boxers, Mexico’s Julio Cesar Chavez won six world titles in three weight divisions during a long and brilliant career but he is best remembered for the record 87 consecutive fights he won from his professional debut in March 1980 until a draw against Pernell Whitaker in September 1993 ended his streak. In that time he defended his world titles 27 times and won title fights a record 31 times. It’s unlikely anyone will ever come close to matching him. Football is a cruel game. While the cream usually rises to the top, there is no other sport where dominating a match brings so little promise of reward on the scoreboard. After all, it’s not the shots on goal that matter, only the shots that find the back of the net. Just ask Argentina. Which is why Portuguese side Benfica’s 29 consecutive wins in 1972 and 1973 is so impressive. The European record streak spanned two seasons and helped them go through the entire 1972-73 season undefeated. By far the most impressive number in this top five belongs to former squash world champion Jahangir Khan. The Pakistani legend won a staggering 555 consecutive professional squash matches between 1981 and 1986 including five World Open trophies and a mention in the Guinness Book of World Records as holding the longest streak of any professional athlete. Could this be the single greatest sporting feat of all time? The Australian cricket team holds the world record for the most consecutive Test wins with 16 – a feat they achieved between 1999 to 2001 and again from 2005 to 2007 – but even more impressive was their achievement in winning three consecutive World Cups in 1999, 2003 and 2007. In fact, between 1999 and 2011 Australia won 27 consecutive World Cup matches and went 32 matches without defeat. Their stunning run included winning the 2003 and 2007 World Cups by winning all 11 games on each occasion. Given the volatility of One Day cricket where form is usually fleeting, that’s an amazing achievement.