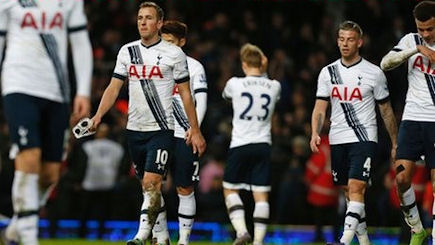 Although Leicester City’s title hopes were dented by a revitalized West Bromwich Albion on Tuesday, manager Claudio Ranieri must have enjoyed himself just 24 hours later as he sat back, sipped some good Italian wine and watched his side’s three main title rivals all suffer a meltdown. Incredibly, what looked to be a costly slip when Leicester could only manage a 2-2 draw against West Brom instead saw their lead at the top widen with Tottenham and Arsenal now three and six points behind respectively! It was the nervy Arsenal of old on display on Wednesday night as goals from Wayne Routlege and Ashley Williams completed an extraordinary Swansea comeback at the Emirates. Sitting 16th on the Premier League ladder, Swansea was widely considered an opponent that could provide the Gunners with an easy win and morale boost ahead of their crucial showdown with Tottenham this weekend. Instead, Arsenal’s shock 2-1 loss has exposed some serious concerns over their title credentials and ability to perform under pressure.

As it turned out though, Tottenham also blew their chance to claim top spot after losing 1-0 to West Ham United. Michail Antonio’s early goal was the difference between the two sides with Spurs making a number of uncharacteristic mistakes that suggested nerves had played a significant part. A remote but still potential title contender, Manchester City looked a different team to the one that won the League Cup against Liverpool last weekend. Less fluent and motivated, City was smashed 3-0 at Anfield by the same side they beat in a penalty shootout just a few days earlier, wasting the opportunity to make up some ground on Leicester. With a game in hand, they now trail the leaders by 10 points and it seems Pellegrini’s team may be focused more on the Champions League than the Premier League.

We are now approaching the threshold of the season and, ironically, it is the Foxes – the team with the least top flight experience of all the contenders – showing the most resilience.