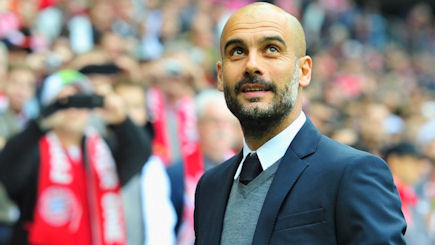 If the January transfer window had seemed a little too quiet to believe considering the enormous financial power of England’s Premier League, Manchester City certainly made amends on deadline day by signing the most sought after man in football – Bayern Munich manager Pep Guardiola! To be fair, it was also the worst kept secret in the world with Guardiola’s signing predicted ever since Txiki Begiristain and Ferran Soriano – two of Guardiola’s former colleagues at Barcelona – joined City in 2012. Guardiola initially caused quite a surprise when he chose to join Bayern Munich rather than Man City in 2013, but will finally arrive at his destination in the summer with Begiristain and Soriano having worked hard to implement their overarching philosophy in Manchester.

Current City manager Manuel Pellegrini has basically been a dead man walking since Guardiola announced his decision to leave Munich before the Christmas holiday. On different occasions the Spaniard has previously revealed his desire to work in England and with Chelsea no longer the center of power in the Premier League, City has done everything they can to lure their man. For his part, Pellegrini has done a good job at City, winning the double in 2013/14 when they pipped Liverpool in the League. But it has never been a five star performance. With City’s squad and financial power, the expectation is that they should have been far more dominant than the reality – not to mention their terrible record in the UEFA Champions League.

The owner of Manchester City, Sheikh Mansour bin Zayed al Nahyan, is rich and ambitious enough to ensure his club ranks among the European elites. But after five years of spending big, City hasn’t reached the heights he expected.

And while Pellegrini is a well-respected figure in England, City needs Guardiola if they are to take on the giants such as Guardiola’s former clubs Barcelona and Bayern Munich.