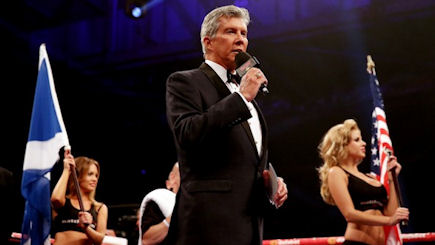 The biggest sporting event of 2015 will surely be the long-awaited “super fight” between Manny Pacquiao and Floyd Mayweather Jr in Las Vegas on 2 May, and when it comes to providing a spectacle worthy of these two boxing legends only the best will do.

WGM was more than a little excited to read this week that the great Michael Buffer is in negotiations to be the main ring announcer for the bout, predicted to be the most watched of all time. The one and only Michael Buffer

For those unfamiliar with Buffer’s work, he’s the guy responsible for the famous catch-phrase “Let’s get ready to rumble!” and his rambling, pre-fight introductions are finely choreographed works of art. In fact, there is a small part of me looking forward to Buffer’s performance more than the fight itself.

But Buffer certainly isn’t signed, sealed and delivered just yet with boxing’s other great modern day announcer, Jimmy Lennon Jr, also in the mix. Most of the time, the decision as to who introduces a fight depends simply on which network is televising it with HBO using Buffer and Showtime using Lennon. The announcers aren’t the only ones with network alignments though – the fighters are aligned too – and it just so happens that Mayweather is contracted to HBO and Pacquiao to Showtime.

As a result, for the first time since Mike Tyson fought Lennox Lewis back in 2002, the rival networks will jointly air the Mayweather-Pacquiao fight with profits from pay-per-view sales split down the middle. Which leads us back to Buffer and Lennon, who faced this very same situation leading into the Tyson-Lewis battle. The solution on that occasion was to use both, the pair alternating segments of their introductions before Lennon signed off with his catch-cry “It’s showtime” and Buffer the famous last words “Let’s get ready to rumble.”

To this day it remains one of my favorite sporting moments and I highly recommend taking the time to watch it here if you’ve never seen it.

A unified ring announcement would probably be well suited to a unification fight, but whether we end up with just one announcer or both, no big fight is the same without Buffer’s dulcet tones ushering in the moment. Fingers are crossed!