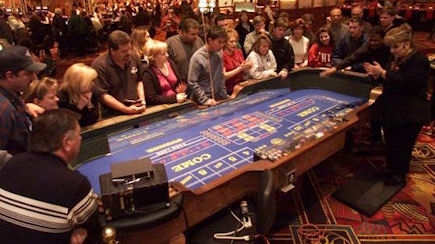 The history of gambling dice games is a long one, as dice have been used to gamble for thousands of years. Romans, Egyptians, American Indians and Koreans were all big dice players in some form or another.

Many believe that dice games rose in popularity in Europe after the Crusades, as the Knights not only bought home gold, exotic fruits and spices – they also returned with popular Arabian dice games, like Azzahr. Azzahr and the popular European dice game Hazard both have similarities to Craps, and both games could lay claim to giving birth to the popular modern day casino game that we know today.

Like nearly all casino games, there are a few different stories about how craps developed into the game we know and love today. The one group that always seemed to have their noses right in the mix of gambling history were those gambling crazy French aristocrats. In the 1700s they were gambling on anything and everything – before the Revolution came and chopped off most of their heads for their carefree lifestyle. Most gambling historians believe that the name of the game came from the French pronunciation of the word ‘Crabs’ which was an earlier version of the game of Hazard. A minority believe that the game was originally called ‘crapauds’ after the toad – due to the toadlike position of its players. Some say, however, that the toad’s link to the story is because the English labelled the diceloving Creoles living in New Orleans as ‘Toads’. Where there is little argument is that the game, as we know it today, is as American as apple pie. In the early 1800s the game was simplified. Two men are consistently mentioned in the history of craps: New Orleans entrepreneur and gambler, Bernard de Mandeville, who created simplified uniform rules for the game that saw it spread up through the US on the back of the famous Mississippi gambling steamboats; and John H. Winn, who then revolutionised the game by making it possible for players to bet right or wrong – which meant that bets on throwers to lose could also be accepted. This made it harder for scammers to use weighted dice to cheat in the game.

Once gambling became legalized in 1931 in Las Vegas, Craps became the most recognisable of all table games. Casinos love it as it creates atmosphere; and it has also been a favourite for the Hollywood movie makers, who love to use the game to showcase high stakes gamblers asking gorgeous women to kiss the dice to make them ‘lucky’. The game had a downturn in popularity in the 1990s for some reason, but it is coming back stronger than ever.

The one thing that all Craps players love is excitement. You will often hear people cheering at a Craps table. It is an addictive game. It’s fast and entertaining, and it attracts everyone from the biggest high rollers to the smallest punters, looking to turn a little into a lot. It has many features that make it so appealing. On a good throw, if you are prepared to keep pressing your bets, you can make a lot of money – so it certainly appeals to the adrenaline-charged gambler. The option for the player to hold and caress the dice before throwing them down the table adds to the drama. It is also a game that can have the crowd cheering for you if you can get on a roll, because other people are winning money on your lucky spin.

The worst thing about Craps, however, is that it is not the easiest game to learn how to play. Make sure you grab a copy of World Gaming Magazine next issue, when we will start to teach you the basics of how this wonderful game works.