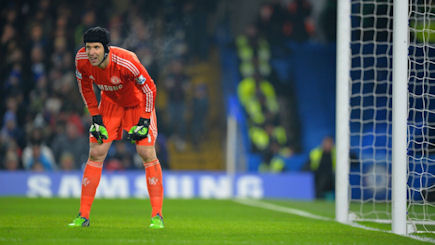 There might be very few £10 million deals made these days that truly excite the fans, but Petr Čech’s move to Arsenal this summer has certainly raised expectations among the Gunners faithful that they can challenge for the title next season. John Terry recently claimed the Czech could save Chelsea “10 to 15 points in a season” – a slight exaggeration perhaps but his way of expressing his admiration for his former teammate. Yet it really wasn’t too far from reality considering the erratic performances of his predecessors such as Lukasz Fabiański, Manuel Almunia, and even Wojciech Szczesny to some extent. Chelsea manager Jose Mourinho doesn’t want to lose Čech as he regards him “one of the top three goalkeeper in the world”. But he faced a dilemma given he has another elite goalkeeper in Thibaut Courtois in Chelsea’s squad – the Belgian 10 years younger than Čech but with just as much talent. After a season spent warming the bench, Čech has made the choice to move to one of the other top clubs that wanted his services. In the end his wife’s preference of staying in London facilitated the move to Arsenal.

WGM already considers Čech one of the best buys of the new season. Goalkeeper is a position beyond the normal age restriction, with many elite keepers now extending their careers well into their 40s. Take Gianluigi Buffon, for example. The Juventus goalkeeper has been crucial to the club’s resurgence, particularly in their Champions League campaign last season. At the age of 37, Buffon’s reflexes and one-on-one stopping have shown no sign of getting worse since he set a new record transfer fee for a goalkeeper way back in 2001 when he moved from Parma to Juventus. To this day, Buffon remains one of the best. Peter Shilton, the foundation of Nottingham Forrest’s dynasty in the 70s and early 80s, hung up his boots at the age of 48, while Ray Clemence – one of Liverpool’s legends – called it a day at 40. Goalkeepers enjoy longevity on the pitch because they require less mobility than outfield players so at 32 Čech still has much to offer his new club. Mourinho and, more importantly, Chelsea owner Roman Abramovich gave Čech permission to move to Arsenal out of respect after 10 years of memorable service. The farewell was not easy, but Čech needs a new adventure. However, it is ironic that the Arsenal goalkeeper with the highest clean sheet rate in the Premier League is David Ospina from last season at 47 percent of games played. Although Ospina was understudy to Szczesny at the start of the year, he quickly number one after the Pole’s disastrous performance in January. By contrast, Čech holds the record for the fastest to 100 clean sheets – having reaching the milestone in just 180 games — and needs just three more to surpass David James (170) for the most ever in Premier League history. Čech will infuse confidence into Arsenal’s young squad and although he may or may not earn them 10 to 15 points as Terry once suggested, his mere presence in front of goal will encourage the Gunners. With his experience in a championship side, Čech will indeed have Arsenal dreaming of the title when the new season kicks off.