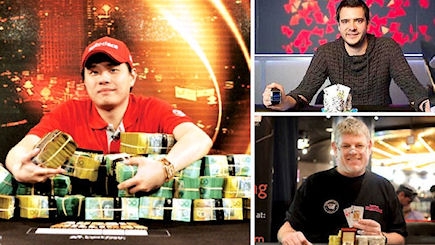 As the calendar ticks over to January it’s always the Aussie Millions that kicks off the new year of international poker. Despite the push from Macau, Crown Casino in Melbourne, Australia still remains the home of poker in the Asia-Pacific region. Outside of the World Series the Aussie Millions remains one of the handful of tournaments that every poker player in the world would love to add to their resumé.

29-year-old Mervin “The Cat” Chan from Malaysia is the new champion, possibly ranking as the most significant win from an Asian-based player ever in the history of poker. Not only did Chan claim the AU$1.6 million prize and a Chrysler 300C car valued at over AU$50,000, he also outlasted 628 other participants on his way to winning the title, including poker superstar Patrick Antonius who finished third. Mervin “The Cat” Chan from Malaysia

18 players lined up in the AU$250,000 Challenge. This number would have been higher if so many of the big guns hadn’t still been alive in the main event with the likes of Antonius, Ivey and Shak all missing out on the huge buy-in event. Sam Trickett eventually outlasted the rest of the field and pocketed AU$2 million for his troubles, a figure that takes him to second place in the all-time money leader board. Andrew “good2cu” Robl won the AU$100,000 Challenge, after initially being the first to be eliminated! His decision to re-enter, bringing the total field to 22 entries, certainly proved fruitful with a juicy AU$1 million harvest.

Australian Poker Hall of Famer Gary Benson won the AU$1,150 re-buy tournament, finishing in front of last year’s WSOP Main Event third placegetter Jacob Balsiger (2nd) and likeable UK pro Neil Channing (5th). Another one of the old school Australian brigade, “Sticky” Mick Guttman, won event 3, the no limit hold’em shootout. Special mention should also go to the opening event that saw a record breaking 1,338 entrants battle it out for the AU$250,000 first prize that eventually went to Rupert Elder. Once again we congratulate Crown Casino for being a major supporter of poker in the Asia-Pacific region. From top to bottom: Bulgaria’s Dimitar Danchev and Gary Benson who won the AU$1,150 re-buy tournament

Meanwhile, after 10 days of incredible action, the 10th Anniversary of the Pokerstars Caribbean Adventure (PCA) was run and won. In all 41 champions were crowned at Atlantis in The Bahamas, and millions of dollars in prize money was awarded. Bulgaria’s Dimitar Danchev won the Main Event, collecting US$1,859,000 after 987 players registered for the tournament, creating a total prize pool of US$9,573,900.

Having two major events like the Aussie Millions and the PCA in the very first month of the year shows that the sport of poker is alive and well. The attention of the Asia-Pacific poker community now turns to the Asian Poker Tour Asian Series event to be held in Korea’s Jeju island (US$1,000 main event starting March 2) and the Asia Pacific Poker Tour season 7 opener in Seoul (KRW 3 million main event starting March 14).

However, these two events are just warm ups for what is arguably the biggest thing to ever happen to Asia-Pacific poker, the inaugural WSOP APAC event, to be held at Crown Casino from April 4 to 15. The name of the winner of the AU$10,000 main event will be etched in the history books of Asia-Pacific poker forever.