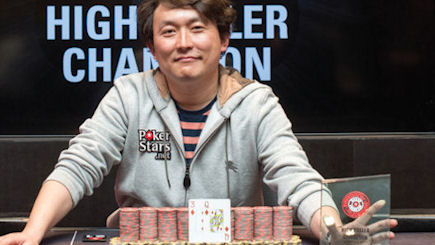 Since its inception back in May 2008 when just 33 dedicated souls took part, the Macau Poker Cup with its iconic “Red Dragon” trophy has become one of the most popular events on Asia’s busy tournament calendar. Growing rapidly with each subsequent running, last year’s winter edition attracted a record field of 995 starters and hopes were high that MPC22 would see the Main Event pass the 1,000-player mark for the very first time.

It didn’t quite get there, with 987 players rolling in across the four Day 1 flights, but this would soon become an event to remember nonetheless. MPC22 saw the buy-in increased from HK$11,000 to HK$12,000, so although player numbers remained stagnant the HK$10,339,812 prize pool easily broke the previous record as it topped HK$10 million for the very first time. The HK$2.2 million first prize would also be a Red Dragon record for the last man standing although the fast structure ensured only 285 players remained in contention by the end of Day 1 and 116 by the end of Day 2.

Day 3 began with all remaining players officially in the money including three former winners of the event – Raymond Wu, Victor Chen and Nicky Tao Jin – and Sweden’s Roger Spets although none would survive through the afternoon. Instead, it was Australian high stakes specialist and good friend of WGM David Steicke headlining the final nine players while Japan’s Takuya Yamashita made it back to back final tables after finishing third at MPC21 last August. Yamashita was quickly in the thick of the action when play resumed, sending Steicke to the rail on just the second hand of the final table. It looked like the Japanese would pay the price for a poorly timed show of aggression as he got it in with Q9 against Steicke’s AK but a 982A9 board fell his way to propel him up the chip counts.

Unfortunately for Yamashita, his aggression would eventually get the better of him when he ran K9 into the AA of Yunye Lu to fall short again in fifth.

Lu looked the man to beat for much of the final table, ending the dreams of a number of his opponents and entering heads-up play against Yuguang Li holding a commanding 3 to 1 chip lead. It wouldn’t last long though and after the two Chinese agreed to a deal it was Yuguang who would quickly end it after turning two pair and picking off Lu’s ambitious bluff. The 36-year-old collected just under HK$1.85 million for the win and would have been pleased enough with his week’s work had he left it at that, but incredibly he wasn’t done just yet.

Yuguang hadn’t even paused to take a deep breath following his Red Dragon success when he returned to the registration desk and took his seat in the HK$80,000 High Roller – one of 67 players keen to mix it up against a high quality field.

Yet 24 hours later Yuguang was celebrating again, not only adding a second tournament victory in as many days but just about doubling his winnings in the process. The poker gods were clearly smiling on Yuguang and he won’t soon forget the decisive final hand in which he shoved Q3 suited into the KK of Stephen Chiswick only to turn a flush. But everyone needs to run good once in a while and his stunning weekend will live long in the MPC memoires.

Much like Yuguang, Ireland’s Stephen O’Dwyer seems to save his best for Macau. Only last November O’Dwyer won the HK$500,000 Super High Roller event at ACOP for a whopping HK$14 million and added another title at MPC22 as he topped a field of 237 players to win the HK$20,000 No Limit Hold’em event and another HK$1 million. Nice work if you can get it!