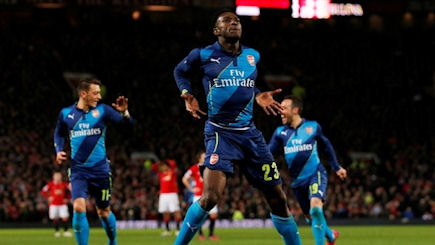 Louis van Gaal’s hopes of winning a trophy in his first season at Manchester United came to a crashing halt after his side was eliminated from the FA Cup by old rival Arsenal in the quarter-finals. Making the loss even more difficult to swallow was the fact that the winning goal scorer was Danny Welbeck – a United academy player from the age of eight but deemed surplus to requirements upon van Gaal’s arrival. The United manager instead opted for 19-year old teenager James Wilson, who featured in only one game last season, and new recruit Falcao who has struggled to fit into the English game.

Welbeck striker has been a little inconsistent in front of goal since moving to Arsenal, scoring just four times in 16 league appearances – a moderate return given his £16 million price tag. But on his day, Welbeck has always been a precocious talent with legendary United manager Sir Alex Ferguson always a big fan. It was ironic to see him score at van Gaal’s expense and celebrating at his beloved Old Trafford – although the celebration was nothing compared with Emmanuel Adebayor’s famous celebration after scoring against his former club Arsenal when he ran the length of the pitch before sliding in front of the Arsenal fans. Still, but you can certainly see the feeling of revenge from Welbeck’s repeated fist pumping, “This one’s for you, van Gaal.”

The one positive for the Dutchman is he can now focus solely on the top-four race in the Premier League. United is currently sitting in fourth place with Liverpool and Tottenham Hotspur trailing behind just two and three points respectively. The race is on!