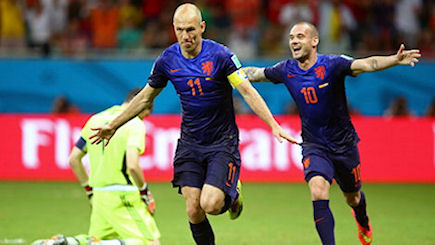 What a huge weekend of sport it was! We’ll start in Brazil where the World Cup is well underway and as expected there has been plenty of goals, plenty of controversy and an upset or two. It’s been a good start for the big guns of course with Brazil claiming a 3-1 win over Croatia in the tournament opener thanks to two goals from Neymar – although the Croatins were filthy that a 1-1 deadlock was broken by a terrible decision to award a penalty midway through the second half. Chile, Mexico, Colombia and Argentina also won their opening matches to keep the South American contingent happy, but there were some shock results as well – none moreso than the Netherlands’ 5-1 thrashing of defending champions Spain. Two goals from Arjen Robben and two more from Robin van Persie left Spain stunned as they ran rampant in the second half. Uruguay was also surprised 3-1 by Costa Rica, while Italy downed England 2-1 in a blockbuster clash.

It hasn’t been a great start for the Asian sides. Australia fell 3-1 to Chile after falling 2-0 behind early and Japan lost 2-1 to Cote d’Ivoire. The Japanese led 1-0 at half-time and looked well in control but the introduction of star striker Didier Drogba midway through the second half inspired the African nation to score two goals in 90 seconds to steal the win. Germany’s Martin Kaymer produced one of the most dominant performances of all time to win the US Open overnight by eight shots. The former world number one added to the US PGA title he won four years ago after leading from the outset following his stunning opening round 65. Americans Rickie Fowler and Erik Compton were tied for second with Australian Jason Day fourth. His countryman and current world number one Adam Scott finished ninth.

Malaysia’s Lee Chong Wei won the Japan Open for the fifth time with a dominant 21-14, 21-12 win over Hong Kong’s Hu Yun in the final. China’s Lin Dan was an early casualty – eliminated in the quarter finals by Jan O Jorgensen – but it was a better result for China’s women with world number one Li Xuerui beating Taiwan’s Tai Tzu Ying 21-16, 21-6.

San Antonio is just one win away from claiming the NBA title after stunning the Heat with consecutive away wins. After Miami leveled the series 1-1 in San Antonio last week, Spurs headed to Florida on the back foot but completely dominated the defending champions in consecutive games to take a 3-1 lead with Game 5 being played at the time of writing.

Marc Marquez has made it seven wins from seven races to win the Catalunya GP following an epic last lap battle with teammate Dani Pedrosa. Pedrosa threatened to snap the brilliant youngster’s streak as he closed in near the end but when the pair touched tyres with three corners remaining, Pedrosa was pushed wide allowing Marquez to claim victory with Valentino Rossi sneaking through to steal second. And some notable results a week out from Wimbledon with Roger Federer showing he is still a force on grass with his seventh Halle title and Grigor Dimitrov winning at Queen’s in an epic three-set final against Feliciano Lopez. Glamour girl Ana Ivanovic also continued her resurgence with her first ever grass court title in Birmingham.