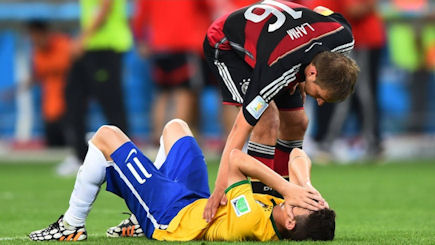 It’s time! A month after the World Cup kicked off in Sao Paulo with host nation Brazil against Croatia, it’s come down to just two teams remaining with Germany up against Argentina in the 2014 final.

We couldn’t have seen two more contrasting semi-finals and what a stunning result it was for Germany on Tuesday as they completely humiliated Brazil 7-1 in an emphatic statement about their intent. By contrast, Argentina progressed at the expense of Brazil on penalties after neither side could find the back of the net in 120 minutes of play. Sunday’s final ultimately pits the relentless professionalism and dour defence of Germany up against an Argentinian side led by mercurial striker Lionel Messi in what promises to be a riveting affair.

Can Marc Marquez continue his stunning run through the MotoGP world championship a ninth victory in nine races this weekend? Marquez heads to Germany sitting on 200 championship points – 72 ahead of second-placed Valentino Rossi – and will make it to the halfway point of the season undefeated should he prevail again on Sunday. It’s hard to go past him too given that he has won the past four times he has raced at this circuit across various classes – 125, Moto2 and last year’s MotoGP.

The grass court season is just about over but the grass specialists are enjoying one last hurrah before they begin preparations for the US Open in earnest. The Hall of Fame Tennis Championships are underway as we speak in Newport, USA, with the likes of Lleyton Hewitt, John Isner, Nicholas Mahut and Ivo Karlovic all through to the quarter finals. And the Tour de France continues over the coming few days but will do so without some of its’ biggest names after defending champion Chris Froome and sprint king Mark Cavendish were both forced to pull out following falls during the opening stages. Italy’s Vincenzo Nibali is now favorite to prevail in the general classification after main rival Alberto Contador struggled on Wednesday’s fifth stage.