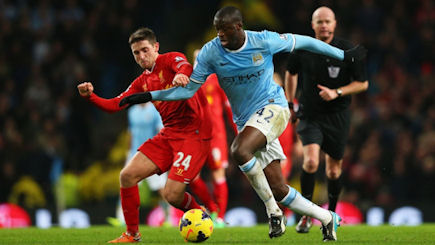 We’re just a week into the new EPL season and already we’ve got a blockbuster on our hands as last season’s top two sides – Manchester City and Liverpool – go head to head at Etihad Stadium. Last season these two sides split their two matches one win apiece with Liverpool’s 3-2 victory at Anfield late in the year seemingly giving them the edge in the title race until their costly slip up two weeks later against Chelsea.

They head to Manchester without Luis Suarez and with questions still to be answered over whether they can match last year’s efforts without him. We’ll go with the home side here. The other big game of the weekend sees Everton host Arsenal, while Manchester United face a tricky trip to Sunderland with plenty of pressure already building following last week’s loss to Swansea. This weekend also sees the other European Leagues get underway. Spain’s big three of Barcelona, Real Madrid and Atletico Madrid will all expect to score comfortable first-up wins against Elche, Cordoba and Rayo respectively while Germany’s Bundesliga and France’s Ligue 1 also play their first matches.

The Formula 1 circus heads to Belgium this weekend as the race for the drivers’ championship heats up. All eyes will be on the battle between Mercedes duo Nico Rosberg and Lewis Hamilton, whose relationship wasn’t helped last start in Hungary when Hamilton ignored team orders to finish ahead of Rosberg and close the gap between them to 11 points. It will also be interesting to see if Red Bull’s Daniel Ricciardo can continue his surge with a third win of the year. With the four golf majors now run and won, attention turns to The Barclays this week – the first tournament of the FedEx Cup playoffs. The top 125 players in the FedEx standings have qualified for this event as they look ahead to a potential US$10 million payday following these four FedEx events. Last year’s winner, Adam Scott, will be looking to repeat his victory however the hot favourite will be Northern Ireland’s world number one Rory McIlroy who is going for a fourth consecutive tournament win. And the US Open gets underway on Monday with Novak Djokovic and Serena Williams the top seeds. However, it will be interesting to see if Djokovic can rediscover his best form following a series of early exits in lead-up events over the past few weeks. With Rafael Nadal ruled out through injury, could Roger Federer claim his 18th career grand slam after winning the Masters event in Cincinnati last week? We’re going to go out on a limb and say yes!