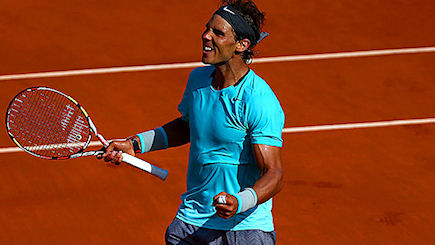 Another eventful weekend in the sporting world with the French Open reaching its culmination in Paris, Mercedes’ stranglehold on the Formula 1 season broken in Montreal, the NBA Finals well underway in San Antonio and more international football friendlies taking place in the lead-up to the World Cup.

Let’s start with the tennis where Rafael Nadal has defied the critics to win his ninth French Open crown and a record fifth in a row with victory over Novak Djokovic in last night’s final. Djokovic has had the better of Nadal in recent times, having prevailed in their last three clashes, but the Spanish master showed his class to come from a set down to win 3-6, 7-5, 6-2, 6-4. Australia’s Daniel Ricciardo won his maiden F1 race in an action packed Canadian Grand Prix – the first time in 2014 that one of the Mercedes duo of Lewis Hamilton and Nico Rosberg hasn’t stood on top of the podium. Having started in sixth, Ricciardo gradually ate away at the leaders with his cause aided when Hamilton was forced to retire with brake problems. Closing rapidly on Rosberg, Ricciardo finally took the lead with just a few laps to go before taking the chequered flag under yellow following a big last lap crash between Sergio Perez and Felipe Massa. Rosberg finished second to extend his Championship lead to 22 points, with Sebastian Vettel third.

Some interesting results in the football with England failing to find the back of the net in a disappointing 0-0 draw with Honduras and Brazil battling to a dour 1-0 win over Serbia. By contrast, there were plenty of goals for some of the other big guns with France continuing their impressive build-up by thrashing Jamaica 8-0, Germany downing Armenia 6-1, Colombia beating Jordan 3-0 and Spain overcoming El Salvador 2-0. And the NBA Finals are locked at one game apiece after Miami won a tight Game 2 in San Antonio today. Spurs dominated the series opener with a 110-95 last Thursday but a solid defensive display in Game 2 saw the Heat prevail 98-96 with the next two games to be played in Miami.