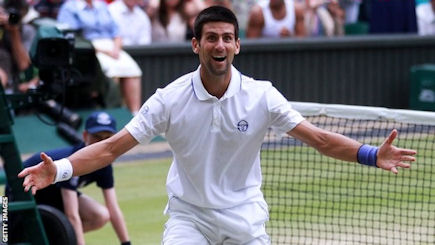 A stunning fourth set comeback wasn’t enough for the great Roger Federer to claim his fifth Wimbledon crown with Novak Djokovic winning a five set thriller to celebrate his second title on the London grass and his ninth grand slam overall. Trailing two sets to one and 5-2 in the fourth, Federer mounted a late challenge to take it to a deciding set before eventually falling 6-7, 6-4, 7-6, 5-7, 6-4 in one of the great Wimbledon finals. And while he remains on 17 career grand slam titles, the Swiss has proven that even at 32 he’s not finished with just yet.

The World Cup has reached the semi-finals stage with Brazil set to face Germany and Argentina to face the Netherlands in two mouth-watering clashes later this week. The hosts scored a thrilling 2-1 win over Colombia thanks largely to remarkable David Luiz free kick, however the biggest news in Brazil right now is the back fracture suffered by their star Neymar, who has been ruled out for the rest of the tournament.

Argentina also look like being without one of their key men in Angel Di Maria with the “dream” final between the South American rivals now in serious jeopardy. Lewis Hamilton has slashed Mercedes teammate Nico Rosberg’s championship lead to just four points after winning the British Grand Prix at Silverstone overnight. Gearbox problems forced Rosberg to retire mid-race and Hamilton wasted no time in taking the race lead in his home GP. He eventually prevailed by around 30 seconds from Williams driver Valtteri Bottas and Red Bull’s Daniel Ricciardo who both came from well back on the grid to finish on the podium. And Britain’s Judd Trump won his first rankings event in two years, beating local hope Neil Robertson 9-5 in the final of the Australian Goldfields Snooker Open. Having beaten China’s Xiao Guodong in the semi-finals, Trump quickly ended Robertson’s quest for a second consecutive rankings title with a dominant display in Bendigo. His win comes as world number two Ding Junhui was found to have breached the World professional Billiards and Snooker Association Members and Disciplinary Rules for withdrawing late from three events and failing to attend the WSL Awards Dinner. He has been ordered to pay a total of £7,750 in fines with a suspended fine of £10,000 should there be any more breaches this season.