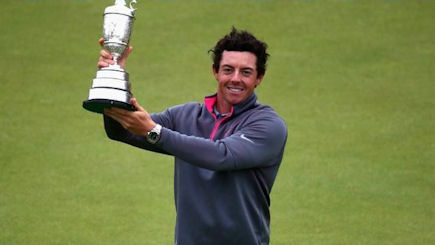 Irishman Rory McIlroy has won his third major and made his father a wealthy man after dominating the British Open at Royal Liverpool over the weekend. The 25-year-old entered last night’s final round leading a by a massive six strokes and despite a late challenge from Sergio Garcia and Rickie Fowler he eased to a two-shot win to add to the US Open he won in 2011 and US PGA in 2012. That’s not the only interesting side story from McIlroy’s success. At around the same time as the 25-year-old was lifting the British Open trophy, his former fiancée Caroline Wozniacki was winning her first WTA event since last October as she trounced Roberta Vinci 6-1, 6-1 in the final of the Istanbul Cup. The pair controversially split in May after McIlroy had cold feet but the separation seems to have helped both in their sporting pursuits.

Nico Rosberg won an action-packed German Grand Prix to extend his Championship lead after teammate and main rival Lewis Hamilton crashed in qualifying and was forced to start from 20th on the grid. Rosberg finished ahead of Williams’ Valtteri Bottas in second with a fast-finishing Hamilton in third although much of the talk centred on a first corner crash that saw Felipe Massa’s car flip onto its roof after colliding with Kevin Magnussen. Italy’s Vincenzo Nibali is closing in on Tour de France victory after 15 stages of this year’s race. With Sky’s stand-in team leader Richie Porte the latest of a number of rivals to fall by the wayside, Nibali holds a huge led of four minutes and 37 seconds over Spain’s Alejandro Valverde with six stages remaining. And England’s cricketers are facing yet another embarrassing loss on home soil, this time at the hands of India. Having been thrashed 5-0 in the Ashes by Australia and losing their recent Test series against Sri Lanka 1-0, England resume tonight at 4-105 needing another 215 runs to win but the history books are against them – only once before has a side ever chased down a target as big as the 319 they are pursuing to win a Test at Lord’s. India hasn’t won a Test away from home in more than three years.