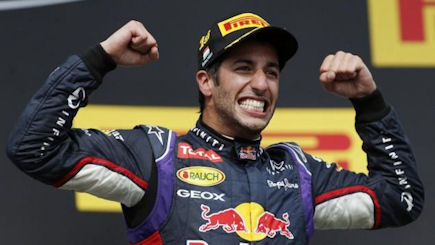 It was another busy weekend of sport around the globe and we’ll start in the United States where the giants of European football have played their first matches of the pre-season Champions Cup. It was a good weekend for the English sides with Manchester City, Manchester United and Liverpool all winning their opening games. City were particularly impressive, thrashing Italian giants AC Milan 5-1 thanks to a first half burst, while Wayne Rooney starred as United beat Roma 3-2. An early goal to Raheem Sterling was enough for Liverpool to beat Olympiacos 1-0, while Italy at least had something to cheer about with Inter Milan beating Real Madrid on penalties. Red Bull’s Daniel Ricciardo produced a wonderful drive in tricky conditions to win the Hungarian Formula 1 Grand Prix overnight. Ricciardo continues to impress in his maiden season and remains the only non-Mercedes driver to win a GP this year after he also prevailed in Canada. Nevertheless, perhaps the most intriguing aspect of the race was the battle between Mercedes teammates Lewis Hamilton and Nico Rosberg with Hamilton disobeying team orders to let Rosberg pass as he held on for third. Ferrari’s Fernando Alonso was second.

Our tips in the Super Rugby semi-finals were right on the money as the NSW Waratahs beat the ACT Brumbies 26-8 and New Zealand’s Crusaders thrashed South African side the Sharks 38-6 to set up an intriguing Grand Final this coming Saturday. The Waratahs and Crusaders have met in the Super Rugby decider twice before with the Crusaders winning both but this will be the first time the Australian side has hosted the biggest game of the season. Italy’s Vincenzo Nibali won the Tour de France yesterday to become just the sixth rider to win all three grand tours following his victory at the Vuelta a Espana in 2010 and the Giro d’Italia in 2013. Nibali dominated from the outset and after seeing his main rivals Chris Froome and Alberto Contador crash out he eased to victory in Paris to win by almost eight minutes.

And the Commonwealth Games continue on in Glasgow with Australia and England dominating the medal tally. Australia currently sits with 26 gold medals to England’s 23, while Asia has been well represented by Malaysia who won their first gold medal of the Games on Saturday thanks to weightlifter Mohd Hafifi Mansor. They are also into the final of the badminton team’s event as they look to defend their crown.