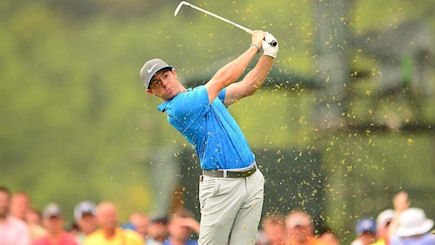 Rory McIlroy has continued his stunning run of form to win his second major of the year and third tournament in a row with a one stroke victory in the PGA Championships at Valhalla overnight. Fresh from his British Open success – which was followed by his first WGC win at the Bridgestone Invitational – McIlroy surged to the lead yet again following the second round last Friday and survived a scare on the final day to win his fourth career major. The Northern Irishman was forced to finish strongly however with Henrik Stenson, Rickie Fowler and Phil Mickelson all mounting challenges.

McIlroy trailed by three strokes after the front nine but an eagle at the 10th set him on track to finish one shot clear of Mickelson.

Spanish gun Marc Marquez joined an elite group to have won 10 consecutive top class races with victory in the Indianapolis MotoGP. Marquez became the first man since Mick Doohan did so 17 years ago to win 10 in a row and extended his Championship lead to a whopping 89 points with Jorge Lorenzo coming home in second and Valentino Rossi third. Arsenal made a statement ahead of the upcoming EPL season with a 3-0 thrashing of Manchester City in the Community Shield at Wembley. The traditional curtain-raiser to the English season pitted EPL champions City against FA Cup winners Arsenal and the Gunners showed the benefits of a busy transfer window with Santi Cazorla, Aaron Ramsey and Olivier Giroud all scoring. And Frenchman Jo-Wilfried Tsonga capped off his giant-killing week at the Rogers Cup in Toronto in style with a 7-5, 7-6 win over Roger Federer in the final. Having already beaten Novak Djokovic and Andy Murray during the earlier rounds, Tsonga showed he will be a real force in the upcoming US Open with his second career Masters 1,000 title.