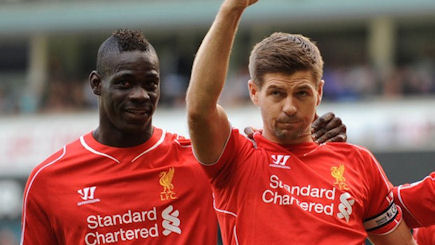 There was as much interest in what was happening off the pitch in the EPL this week as on it with a number of new arrivals signing on the dotted line alongside rumours of many more to come to England’s biggest clubs.

Leading the way were Argentina star Angel Di Maria, who made his debut for Manchester United after making the switch from Real Madrid, and controversial Italian Mario Balotelli who landed at Liverpool from AC Milan with the duo enjoying contrasting fortunes in their first games. Di Maria was easily United’s best player and showed what a good buy he will be but he couldn’t help his struggling side overcome lowly Burnley in an insipid 0-0 draw as Luis van Gaal continues his search for his first win. Balotelli missed a couple of golden chances to score for the Reds but his work rate was good and he was all smiles afterwards as Liverpool eased to a commanding 3-0 win over Tottenham. In a hugely exciting sign for Reds fans following the departure of Luis Suarez, last season’s runner-up shrugged off last week’s loss at Manchester City with goals to Raheem Sterling, Steven Gerrard and Alberto Moreno.

Liverpool and Chelsea were the two big winners of the top sides with the Blues routing Everton 6-3 in a Goodison Park thriller, but City were stunned at home with a 1-0 loss to Stoke while Arsenal could only manage a 1-1 draw at Leicester.

In Spain, Barcelona are the only side to have won their first two games of the year after downing Villareal 1-0. Atletico Madrid scored their first win of the season 2-1 over Eibar while Real Madrid lost 4-2 at Real Sociedad in a sloppy performance. The US Open has thrown up more than a few interesting results over the weekend – particularly on the women’s side where upsets galore have set up an intriguing second week. The latest to be sent packing is Maria Sharapova, who was eliminated by Caroline Wozniacki early today and joins the likes of Petra Kvitova, Simona Halep, Angelique Kerber and Ana Ivanovic on the sidelines.

In the men’s David Ferrer was a surprise loser to Gilles Simon in their third round clash but it’s been business as usual for Novak Djokovic, Roger Federer, Andy Murray and Jo-Wilfried Tsonga who have all progressed to the fourth round.

In motorsport, Marc Marquez was quickly back in the winner’s circle at the British Grand Prix, edging Yamaha’s Jorge Lorenzo in a thrilling duel, while in the United States Australia’s Will Power finally won his maiden Indycar World Championship after a number of close calls in recent years. And China is celebrating another badminton World Championships win after Chen Long stunned world number one Lee Chong Wei 21-19, 21-19 in a thrilling final in Denmark. It was Chong Wei’s eighth attempt to win the coveted crown without success, while Chen was ecstatic after securing victory. China also won the women’s doubles with Tian Qing and Zhao Yunlei proving too good for compatriots Wang Xiaoli and Yu Yang.