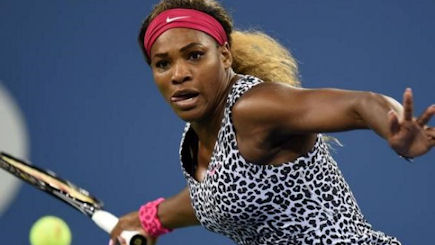 The weekend has come and gone and what an eventful weekend it was with the US Open tennis nearing its conclusion, the Formula 1 circus carrying on in Italy, the basketball World Cup continuing in Spain and a raft of International Friendlies and Euro 2016 qualifiers littering the footballing landscape.

We’ll start in New York where Serena Williams has claimed her 18th career grand slam title overnight with a 6-3, 6-3 win over Caroline Wozniacki. Reasserting her standing as the greatest player of the modern era, Williams didn’t drop a set at Flushing Meadow across the two weeks. In fact, at no stage did she even lose more than three games in a set – making her latest success also the most dominant of her career. It wasn’t to be for fellow great Roger Federer in the men’s with the 17-time grand slam winner bundled out in the semi-finals by big-serving Croatian Marin Cilic. Federer’s exit wasn’t the only surprise of the day though, with world number one Novak Djokovic also sent packing at the hands of Japan’s Kei Nishikori in a stunning upset. Not only will Cilic and Nishikori both contest their first ever grand slam final when they meet tomorrow morning our time, but we are also assured a brand new grand slam champion to cap off what has been an intriguing event.

In Italy, the recent squabbles at Mercedes were put aside as Lewis Hamilton cruised to victory ahead of Nico Rosberg to close the gap to his teammate to 22 points with six races remaining. Hamilton took advantage of some errors by Rosberg to take the chequered flag with Felipe Massa finishing third ahead of Valtteri Bottas and Daniel Ricciardo.

The qualifying campaign for Euro 2016 is underway with world champions Germany picking up where they left off in Brazil with a 2-1 win over Scotland, while Albania stunned Portugal in the biggest surprise of the opening day. Denmark, Poland, Finland, Northern Ireland and the Republic of Ireland were all first-up winners, while France were held 1-1 by Serbia. Unfortunately our tip Greece couldn’t continue their recent good form, going down at home to Romania 1-0. The basketball world championships are down to the final eight with the USA and world number two Spain on track to meet in the final. Lithuania, Russia and Turkey are among the other highly-ranked sides still in contention although it’s hard to see any of them coming close to an American side boasting the likes of NBA stars Derrick Rose and Stephen Curry.

The NFL is back! Although we prefer to steer clear of betting on gridiron for the first few weeks of the season while we get a gauge on how each side is performing, we’ve been keeping a close eye on results with the Seahawks beginning their quest to go back to back with a strong 36-16 win over the Packers. There were plenty of upsets to go round too, with Miami stunning the Patriots 33-20 and the Titans downing the Chiefs 26-10. And it’s finals time in both the NRL and AFL in Australia with some good results for us over the weekend. In the NRL, Brisbane crept into the finals after rivals Parramatta and the Warriors both lost, however it is defending premiers the Sydney Roosters looking the team to beat again after they claimed another minor premiership thanks to a 22-18 win over South Sydney. Meantime, in week one of the AFL finals, title favorites Sydney and Hawthorn both cruised to comfortable victories over Fremantle and Geelong respectively to move to within one win of the grand final, while Richmond’s stunning surge to reach the play-offs came to a sudden end when they were thrashed by Port Adelaide 132-75. Next weekend sees Geelong and North Melbourne fight it out for the right to face Sydney the following week, while Hawthorn will play the winner of Fremantle v Port Adelaide for the other grand final spot.