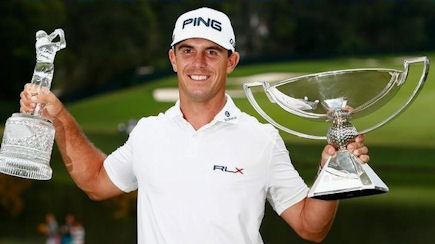 We enjoyed some mixed results with our tipping over the weekend but thanks to golfer Billy Horschel it nevertheless proved to be a profitable one. Horschel was our tip to win the Tour Championship outright after prevailing in the BMW Championships a week ago and he did just that to not only claim the US$1.5 million first prize but also an added US$10 million for finishing top of the FedEx Cup standings. Horschel held off a late charge by Jim Furyk to finish the season off in style, beating Chris Kirk, Rory McIlroy and Furyk to the biggest prize on the PGA calendar.

A week after his bid for a record 18th grand slam came to an abrupt end in New York, Roger Federer moved a step closer to claiming one of the few titles he is yet to win as he led Switzerland into the final of the Davis Cup. Leading Italy 2-1 heading into the final day, Federer ensured the home side would progress with a straight sets win over Fabio Fognini. Their opponents in the final will be France, who upset defending champions the Czech Republic on the back of dominant performances by Richard Gasquet and Jo-Wilfriend Tsonga. Chelsea’s early dominance of the EPL continued as they overcame an early deficit to hand Swansea their first defeat with a 4-1 victory at Stamford Bridge. Digeo’s Costa’s seventh goal in four games ensured the Blues maintained their perfect start while a number of their title rivals dropped crucial points. Nearby, Arsenal and Manchester City played out a thrilling 2-2 draw, while Liverpool lost 1-0 at Anfield in a performance that has fans questioning if they’ve done enough to replace Luis Suarez. There was good news for Manchester United though with the Red Devils crushing QPR 4-0.

In Spain, Real Madrid’s poor start to the season continued with a 2-1 loss to defending Spanish champions Atletico. Real slumped to their second consecutive defeat and were booed from the field by their hole fans after the match – their mood worsened by a third win from as many starts by bitter rivals Barcelona, who downed Athletic Bilbao 2-0 on the back of two Neymar strikes. And the old adage that you never bet on the NFL in the first month is proving true yet again with a host of shock results in Week 2. Most notable was the Seahawks going down 30-21 to the San Diego Chargers, while fellow Super Bowl aspirants New Orleans dropped to 0-2 following a loss to Cleveland. On the other hand, the Buffalo Bills made it two wins from two starts after thrashing Miami 29-10 while the Texans also defied their critics with back-to-back wins as they downed Oakland 30-14.