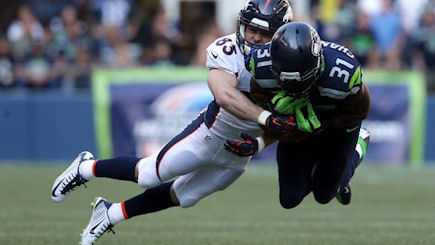 Formula 1 has a new Championship leader after Lewis Hamilton win the Singapore Grand Prix overnight. The season’s only night-time race was full of incidents with Hamilton’s teammate Nico Rosberg suffering mechanical problems on the grid and eventually forced to retire, allowing Hamilton to move three points clear at the top of the drivers’ championship with his seventh win of the year. Red Bull duo Sebastian Vettel and Daniel Ricciardo filled the other two grid positions ahead of Ferrari’s Fernando Alonso with the teams now headed to Japan in a fortnight’s time.

Spanish giants Real Madrid and Barcelona flexed their muscle in La Liga at the weekend, with an astonishing 13 goals scored between them. After a slow start to the year that saw them lose consecutive games, Real rediscovered their form in devastating fashion with an 8-2 win over Deportivo as Cristiano Ronaldo scored his 27th career hattrick and Gareth Bale added two of his own. But not to be done, Barca routed Levante 5-0 a day later to make it four wins from four starts without conceding a goal. They sit two points clear of Sevilla at the top of the table, with last year’s champions Atletico Madrid a further two adrift in third after a 2-2 draw against Celta Vigo. There were upsets galore in the EPL with Liverpool, Manchester United, Everton and Tottenham all suffering shock losses, while Manchester City and Chelsea drew 1-1 thanks to a late equalizer from former Chelsea man Frank Lampard at Etihad Stadium. Liverpool fell to consecutive losses with a 3-1 result at West Ham, but it was even worse for United who led lowly Leicester 3-1 midway through the second half before their defence fell apart to fall to a stunning 5-3 defeat. Everton were stunned 3-2 at home to Crystal Palace and West Brom scored their first win of the season with a similarly unexpected 1-0 win at Tottenham.

The big winners of the weekend were Arsenal, who moved into the top four with a classy 3-0 win over Aston Villa, while after five games the Reds, United and Everton all sit in the bottom half of the table. A big weekend of NFL action was highlighted by the Superbowl replay between the Seattle Seahawks and Denver Broncos, which didn’t fail to live up to its billing. Trailing 17-3 in the fourth quarter, Peyton Manning led a Broncos comeback to force the game into overtime before the Seahawks surged to make it 17 wins from their past 18 games at home 26-20. There are now just three undefeated teams after Week 3 with the Cardinals, Bengals and Eagles all winning again, while the Jaguars, Raiders and Buccaneers sit 0-3.

And the 2014 AFL Grand Finalists have been decided with the Sydney Swans and Hawthorn Hawks set to meet in the decider this coming Saturday. The best two teams all season, Sydney eased into the big one with a 71-point thrashing of an outclassed Kangaroos, but Hawthorn had to survive a late comeback by Port Adelaide as they held on for a three-point win in their quest for back-to-back premierships.