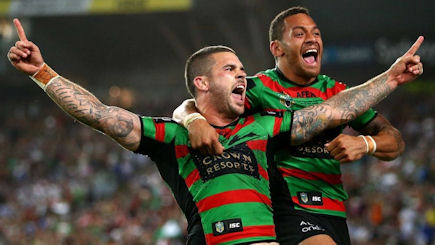 There was barely a corner of the globe untouched by the wonderful world of sport at the weekend as we tried to split our time between watching the football across Europe, the tennis in China, Formula 1 in Japan, NFL in the US and plenty more.

But we’ll start in Sydney where South Sydney have won their first premiership in 43 years after finishing over the top of Canterbury 30-6 in the NRL grand final last night. For those who don’t follow Australia’s rugby league competition closely, no club has been through such a turbulent time as the Rabbitohs. Once known as the Pride of the League, they began a long slide following their 1971 grand final win with ongoing financial problems eventually seeing them kicked out of the comp before the start of the 2000 NRL season. A lengthy court case followed and Souths were ultimately reinstated but it wasn’t until Hollywood star and loyal Rabbioths fan Russell Crowe bought the club in 2006 that their fortunes began to turn. Last night all those years of struggle paid off as they scored a memorable win, with Sam Burgess playing a starring role despite fracturing his cheek bone in the very first minute of the match. Scores were locked at 6-6 midway through the second half but Souths had far too much class in the end with four late tries sending their fans into a frenzy.

It was a wild and, sadly, tragic afternoon in the Japanese Grand Prix yesterday with pouring rain causing a series of accidents that saw young French driver Jules Bianchi rushed to hospital with severe head trauma. Bianchi collided with a recovery vehicle attending to a previous incident and the 25-year-old was reportedly unconscious when marshalls reached him. He underwent surgery last night and remains in intensive care.

Novak Djokovic’s amazing run at the China Open continues as he stormed to his fifth title in as many visits to Beijing. The world number one crushed Tomas Berdych 6-0, 6-2 in the final to make it 24 wins from 24 matches, while Maria Sharapova had to work much harder to win the women’s with a tight three set victory over Petra Kvitova. There was a return to form for some of the EPL’s big guns with Manchester United and Liverpool scoring crucial wins, while Manchester City beat Aston Villa and Tottenham edged Southampton. The biggest game of the weekend, however, saw Chelsea host Arsenal in a bitter London derby with the Blues extending their unbeaten start to the season with a dominant 2-0 win. Diego Costa was on target yet again, however all eyes were on rival managers Jose Mourinho and Arsene Wenger who clashed on the sidelines in the first half when Wenger took umbrage at a heavy tackle on star striker Alexis Sanchez. And Barcelona have made it seven games in a row without conceding a goal to start the La Liga season after a 2-0 win over Rayo. Goalkeeper Claudio Bravo has now gone an incredible 561 minutes without being beaten after moving to the Spanish giants in the summer.