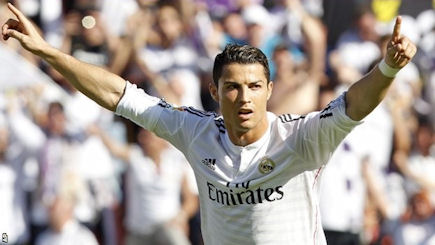 Football’s regular international breaks can throw up some unusual results when players eventually return from national duty to their various clubs around the world but there were no such quirks this time around with Europe’s big guns flexing their muscle ahead of the next round of Champions League matches this week.

Certainly Liverpool would have noted another dominant performance from holders Real Madrid, who thrashed Levante 5-0 ahead of their trip to Anfield on Wednesday. A brace from Cristiano Ronaldo made it a record 15 goals in just seven La Liga games this season and he looms as a huge threat this week to a Liverpool defence that continues to struggle. The Reds managed a 3-2 win away to QPR overnight but only after a remarkable finish which saw the hosts level twice inside the final eight minutes only for an own-goal to give Liverpool all three points.

Barcelona also cruised to a 3-0 win over Eibar to remain three points clear at the top of La Liga ahead of the visit of Ajax this week, while back in England Manchester City made a statement as they thrashed Tottenham 4-1 on the back of three goals from Sergio Aguerro. EPL leaders Chelsea beat Crystal Palace 2-1, while the most remarkable result of the round came at Southampton where the Saints scored their biggest league win in almost 100 years as they thrashed Sunderland 8-0. It was an eventful weekend in Australia, with Wallabies coach Ewen McKenzie dramatically announcing his resignation just minutes after his side’s heart-breaking 29-28 loss to New Zealand’s All Blacks on Saturday night. A week of internal turmoil and rumors of player unrest looked to have galvanized the Australian side as they produced their best performance of the year to very nearly upset the world’s top side. But typically, it all went south when Malakai Fekitoa scored with two seconds remaining – giving Colin Slade the chance to kick the winning conversion after the siren. Soon after, McKenzie announced his departure to complete a disastrous month for the Wallabies. There was plenty of drama nearby the following afternoon too as Valentino Rossi won his 82nd career MotoGP at the Australian Grand Prix. World champion Marc Marquez looked set to add another victory when he led by four seconds inside the final 10 laps but inexplicably lost control and slid off, allowing Rossi to move to outright second in the title race. Jorge Lorenzo and Bradley Smith claimed the other podium spots.

And defending SuperBowl champions Seattle slumped to a second consecutive defeat as they were upset 28-26 by the Rams. The highlight of the game was a stunning trick play midway through the second quarter as the Rams pretended to be fielding a punt on one side of the field when in fact the ball was headed to the other where Stedman Bailey raced 90 metres for the touchdown. The Seahawks now find themselves sitting behind both the Cardinals and 49ers in the NFC West.