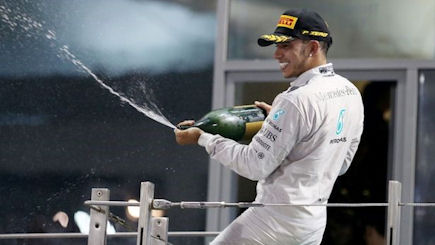 Lewis Hamilton is officially the 2014 Formula 1 world champion after winning the final race of the year in Abu Dhabi. Needing a top two finish to guarantee the title, Hamilton stormed to an emphatic victory while teammate Nico Rosberg – the only man capable of catching him in the championship – endured a woeful day to finish 14th. The win was Hamilton’s 11th of the season and secured his second world championship, while it was also a good day for Williams with Felipe Massa finishing second and Valtteri Bottas third. Roger Federer has claimed one of the few titles to have previously eluded him after guiding Switzerland to Davis Cup glory in the final against France. After a tough opening day in which he was comprehensively beaten by Gael Monfils, Federer teamed up with Stan Wawrinka on Saturday to win the doubles and take a 2-1 lead, then crushed Richard Gasquet in the reverse singles 6-4, 6-2, 6-2 to seal a historic win.

Chelsea’s charge towards the Premier League title continues after they beat West Brom 2-0 on Saturday to extend their lead at the top of the table to seven points. Diego Costa was again on the score sheet for Jose Mourinho’s men although they will still have one eye on Manchester City who overcame an early deficit against Swansea to prevail 2-1 at Etihad Stadium. City’s cross-town rivals Manchester United were also back in the winner’s circle as Wayne Rooney’s opportunistic goal handed the Red Devils a 2-1 win over Arsenal, while Liverpool’s miserable season continued as they fell 3-1 to Crystal Palace. NFL champions the Seattle Seahawks aren’t done just yet after producing their best performance of the season to beat the Cardinals 19-3 and keep their playoff hopes alive. The Seahawks didn’t give the previously 9-1 Cardinals an inch as they moved to 7-4 although they weren’t the only ones to impress. Tom Brady was on fire as he threw for 349 yards and two touchdowns, leading the Patriots to a 34-9 win over the Lions, while Denver beat Miami 39-36 and Philadelphia thrashed the Titans 43-24.

And Australia has reclaimed top spot on the cricket One Day rankings ahead of the 2015 World Cup after beating South Africa 4-1 in their series. The Australians won the last three games of the series thanks to some tremendous batting by Steve Smith and the emergence of another quality fast bowler in Josh Hazlewood to jump ahead of South Africa and India in the rankings.